Here is the last of the gang, Green Lantern Hal Jordan, of Sector 2814:

Perhaps that cocky grin hints at the arrogant villain he was yet to become? At any rate, he’s back on the side of good now.

For your convienience, here are the Hard Travelling Heroes collected in wallpaper form, available in both fullscreen and widescreen wallpapers: 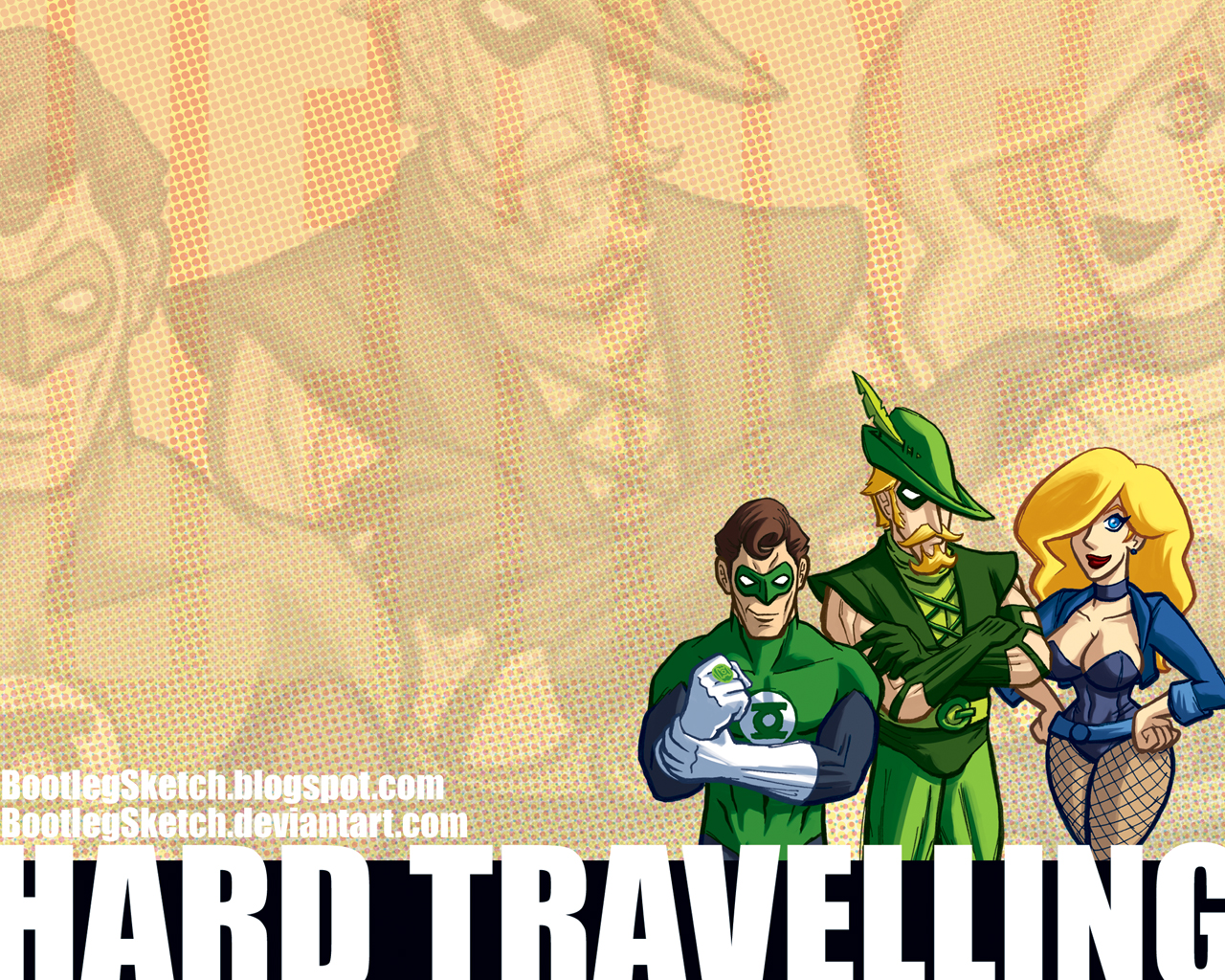 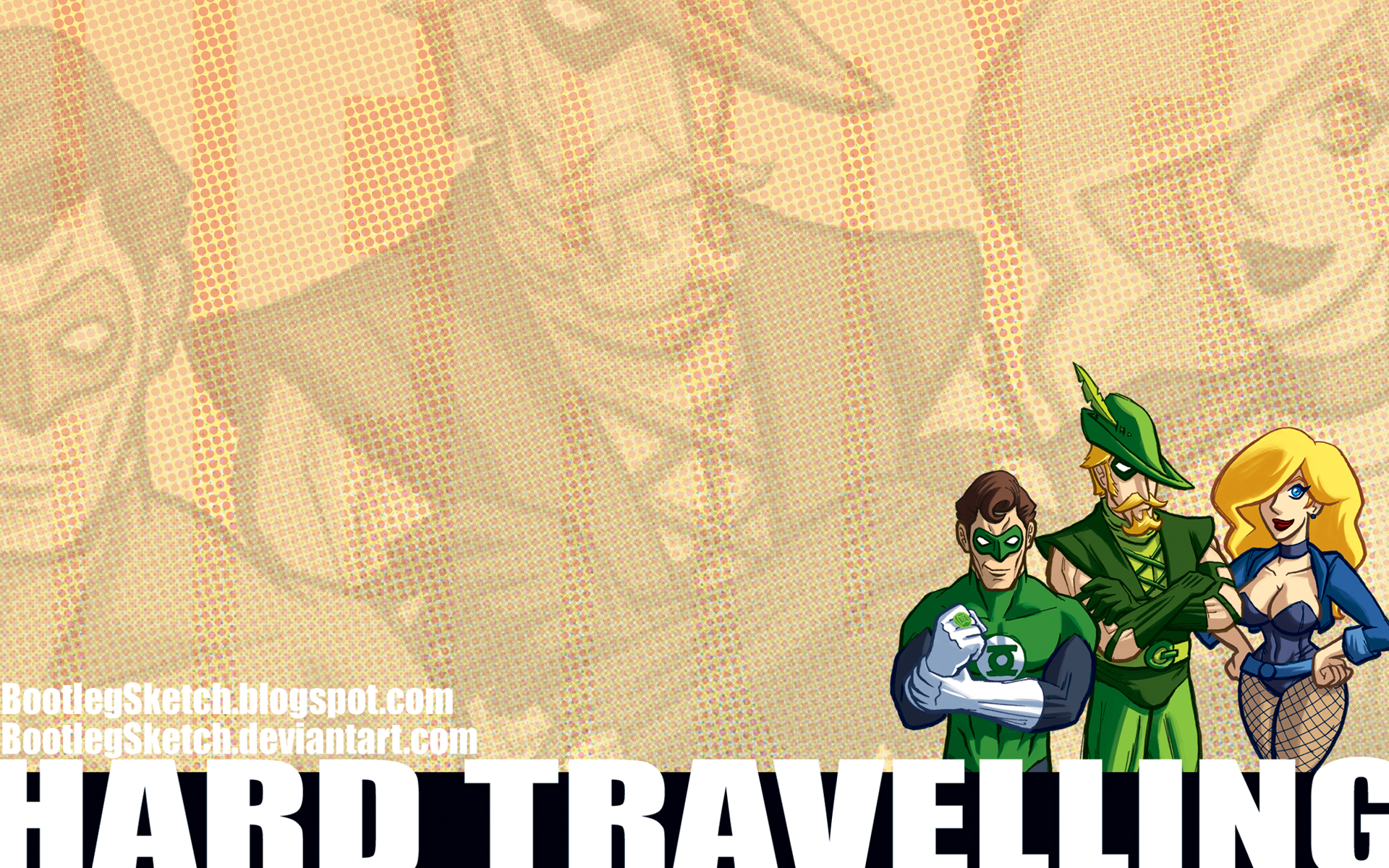 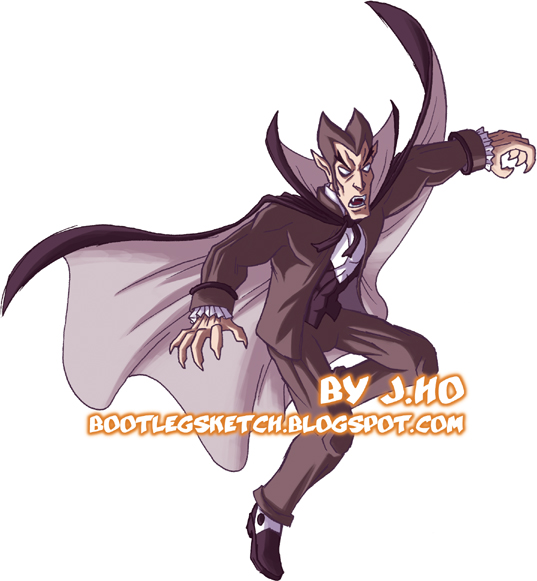 Naturally, my interpretation of Count Chocula is based on his vampiric Darkstalkers counterpart, Demitri. This one was a lot of fun for me. I couldn’t tell you why exactly… it’s possible that I just enjoyed it more because it came together pretty easily. In particular, I’m happy with how the purply-brown color scheme and billowing cape turned out.

The pieces in this series were designed with a group composition in mind, so I’ve whipped up some wallpapers. For your convienience, both fullscreen and widescreen versions are available below. Happy Halloween! 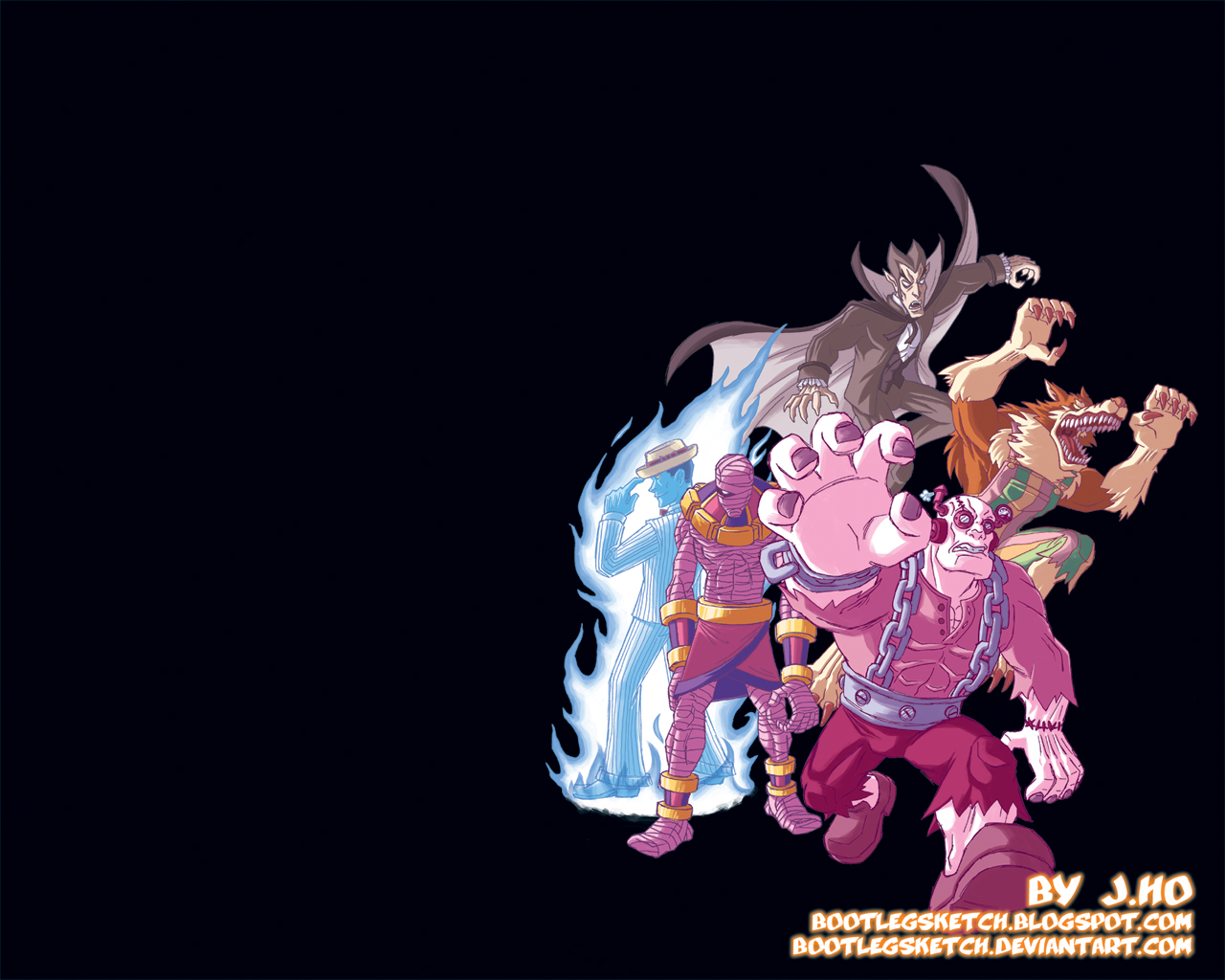 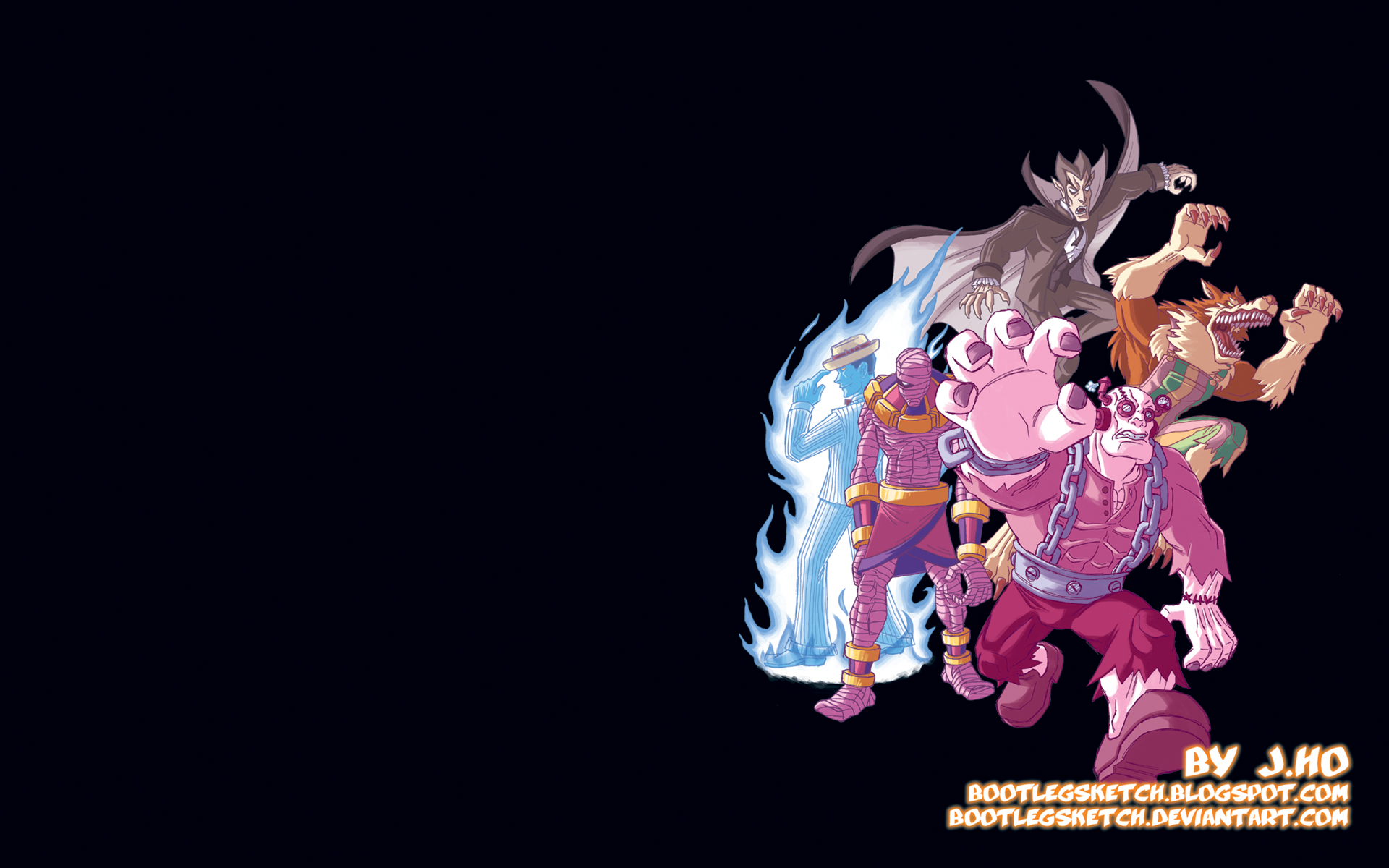 Today is Independence Day in the States (the holiday, not the thing with the aliens). What better way to celebrate than with my favorite Jonny Quest character, Race Bannon, all-American secret agent and tough guy (not to mention bodguard and tutor to Jonny and Hadji): 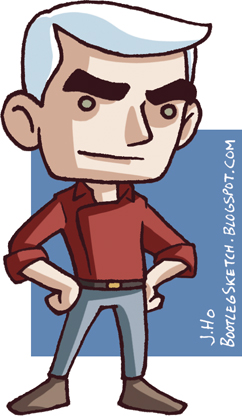 I whipped up some wallpapers collecting the Quest cast–the backdrop was taken from a public domain photo, and is meant to evoke the Florida Keys, base of operations for the extended Quest family. For your convienience, both fullscreen and widescreen versions are available below–please enjoy: 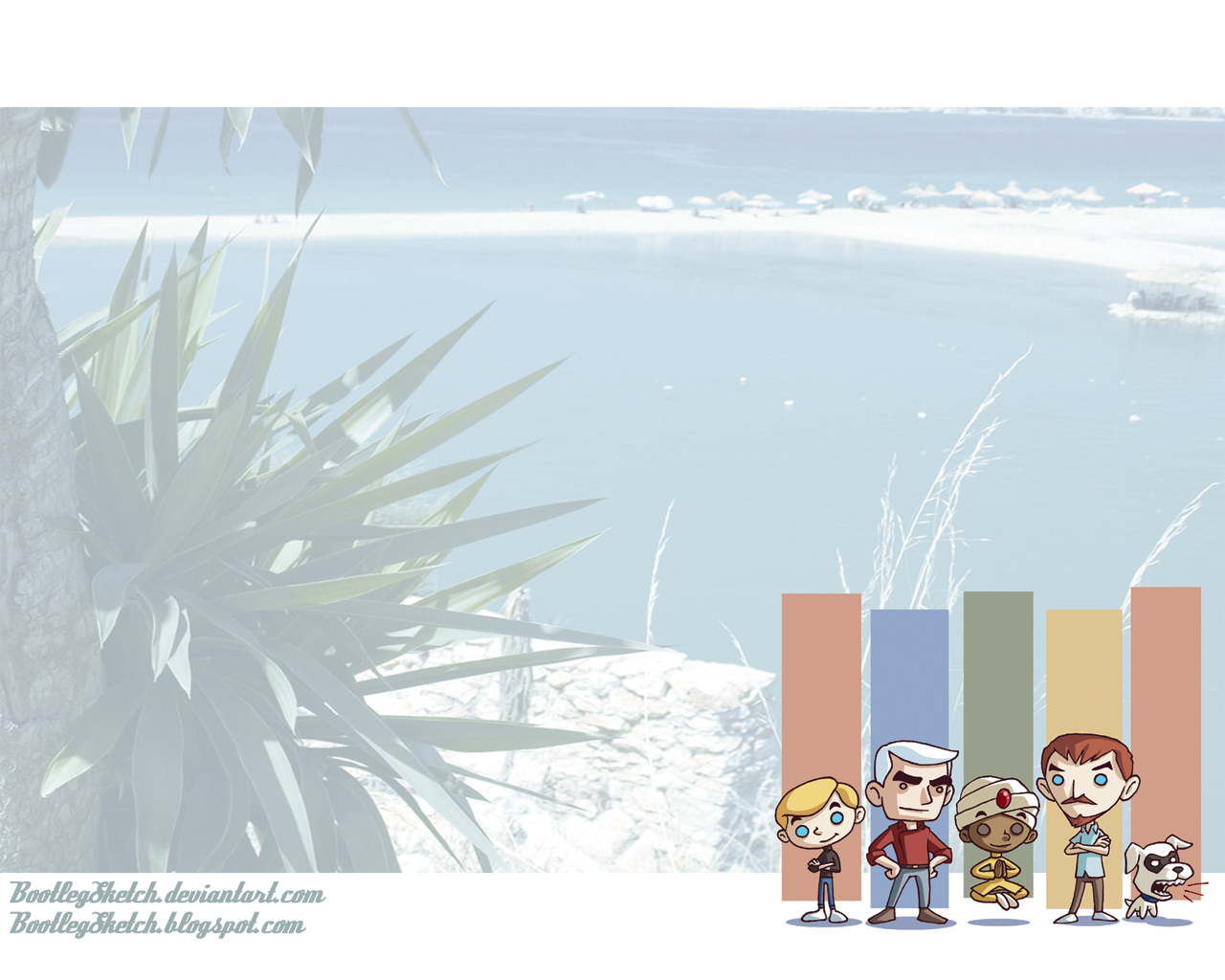 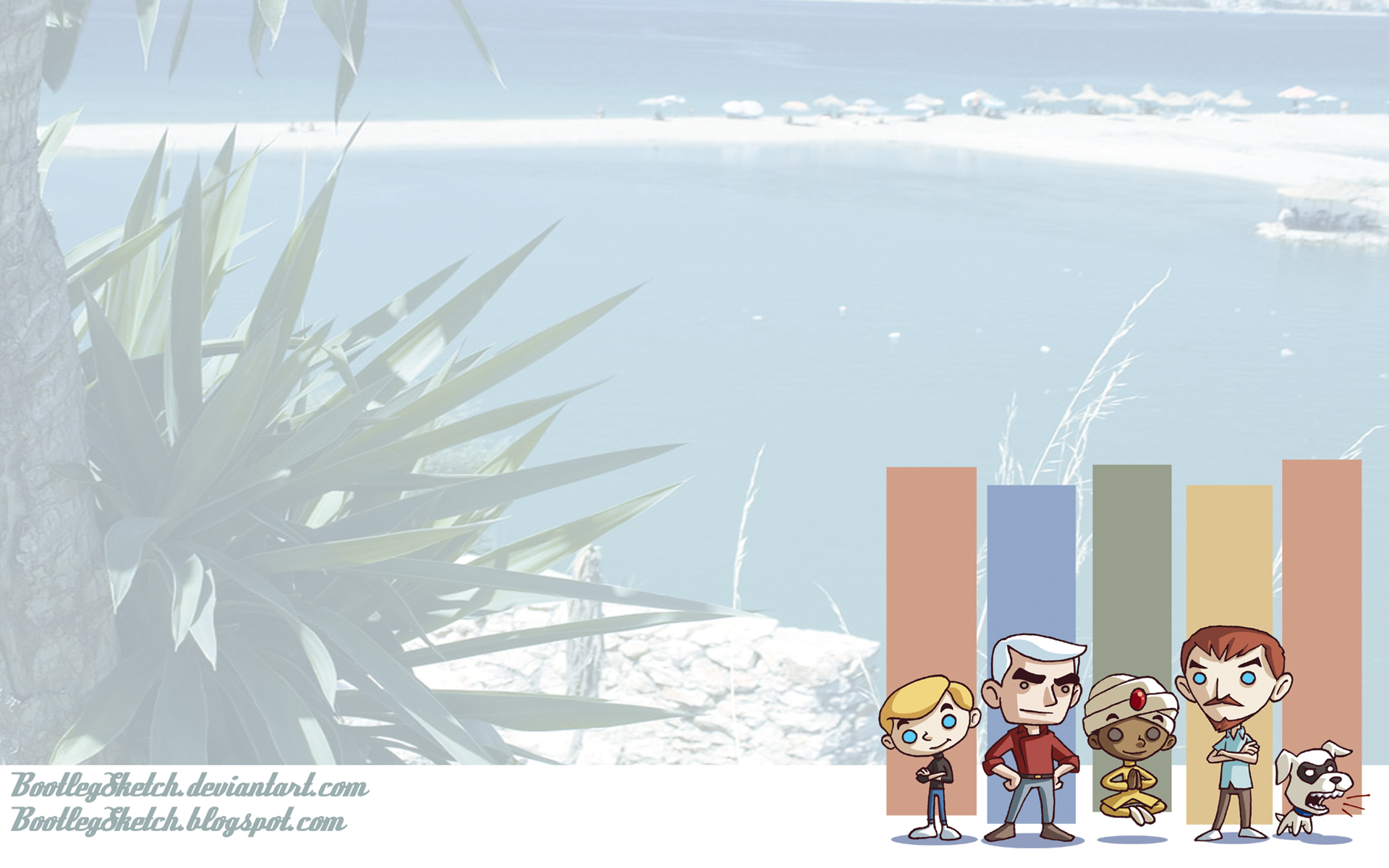 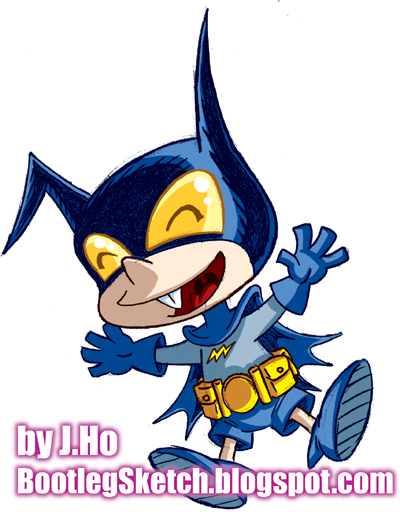 If anyone from DC editorial is reading this, please hire me to write and draw a new Bat-Mite series, co-starring Ace the Bat-Hound. Thank you.

Post Script: Here is a wallpaper as incentive, conveniently available in both fullscreen and widescreen: 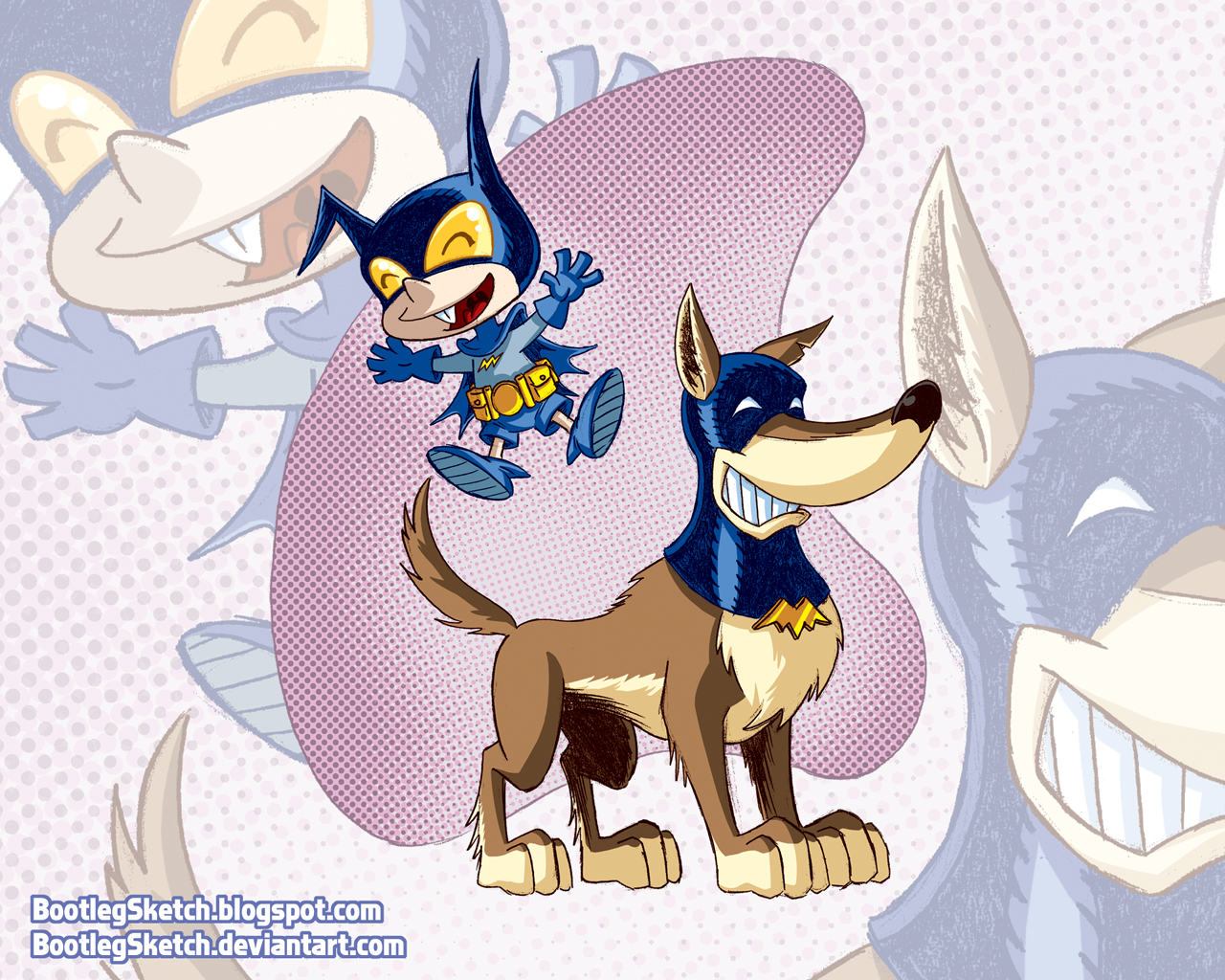 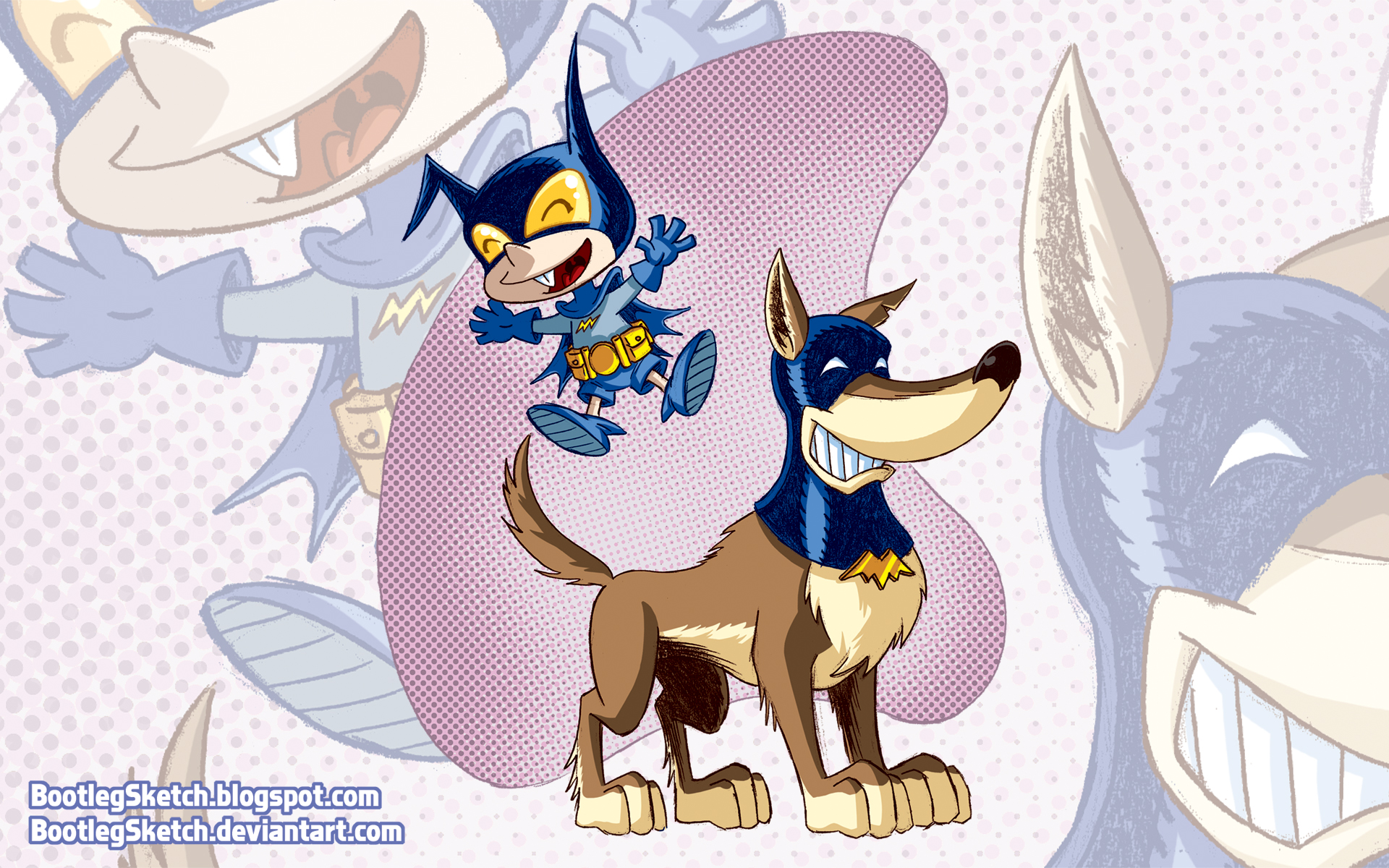 click above for 1920 x 1200 (Widescreen)
February 15, 2008 ~ J.Ho ~ 2 Comments
A drawing of the original Bat-Girl (with some minor costume tweaks) to accompany my illustration of Batwoman:

And a wallpaper–available, for your convenience, in both widescreen and fullscreen proportions. Please enjoy: 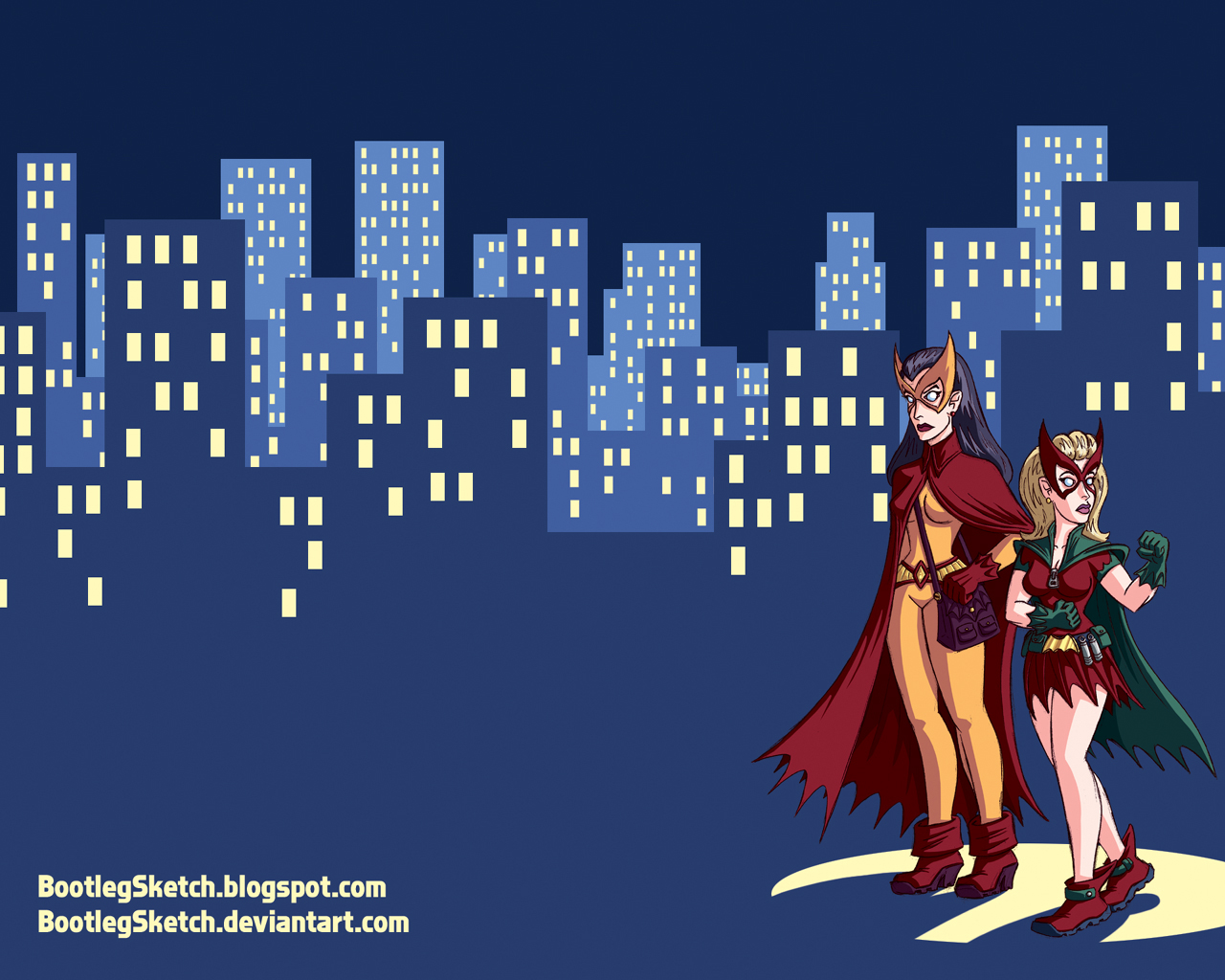 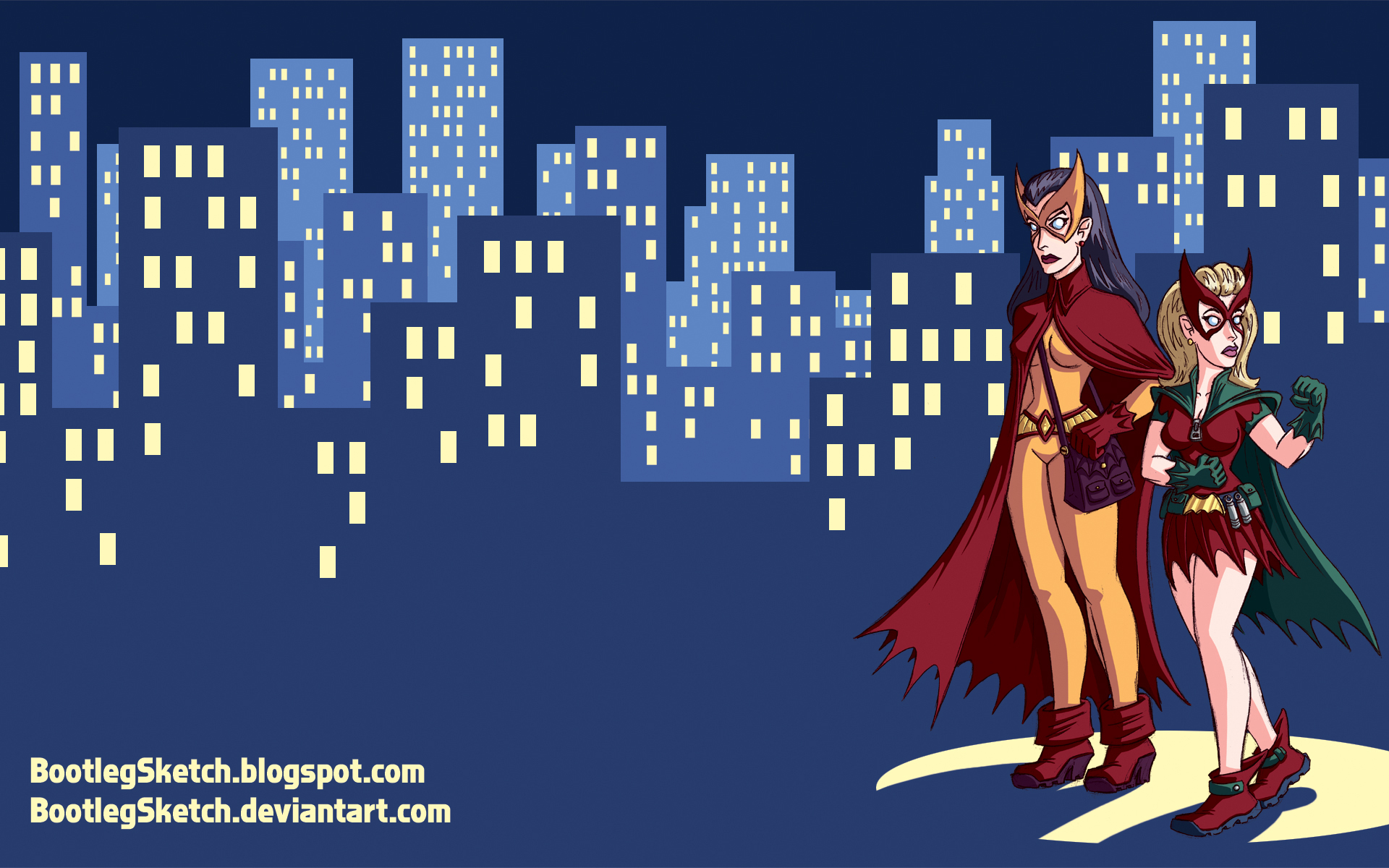 click above for 1920 x 1200 (Widescreen)
January 22, 2008 ~ J.Ho
Concluding this particular series, here is Rash, the fun-loving wisecracker of the Battletoads: 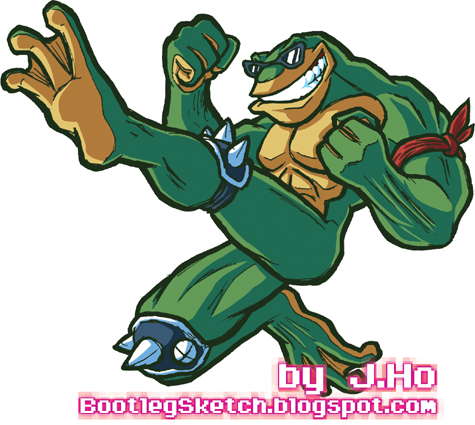 I tried to make my version of the ‘Toads a bit more “realistically” toad-like as far as their faces went, but I kept their bodies tall and lanky to retain the feel of the original designs. Color-wise, I stuck pretty close to the source material. Now how about some wallpapers? (The background elements in the wallpapers were snagged from some screenshots I found online) 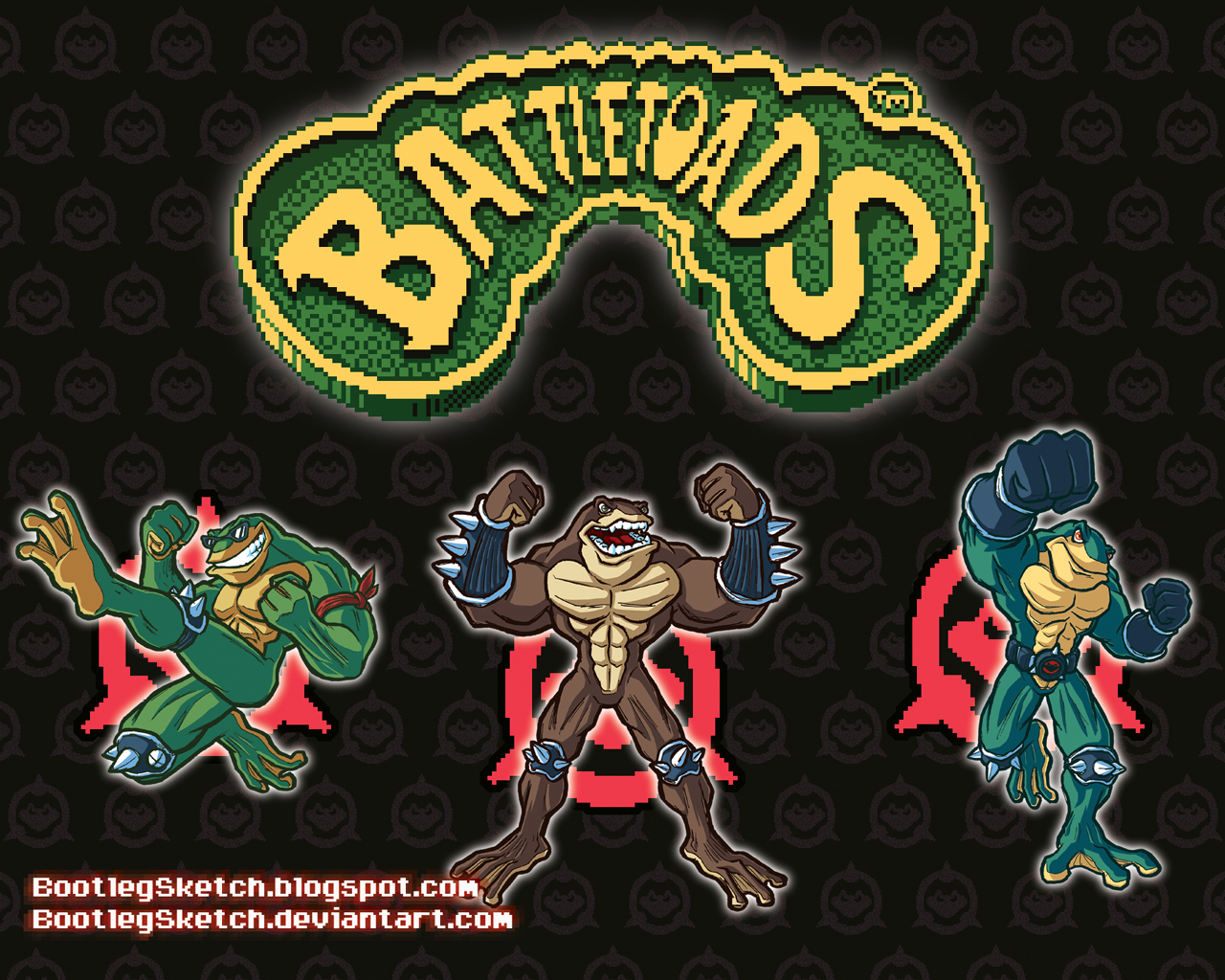 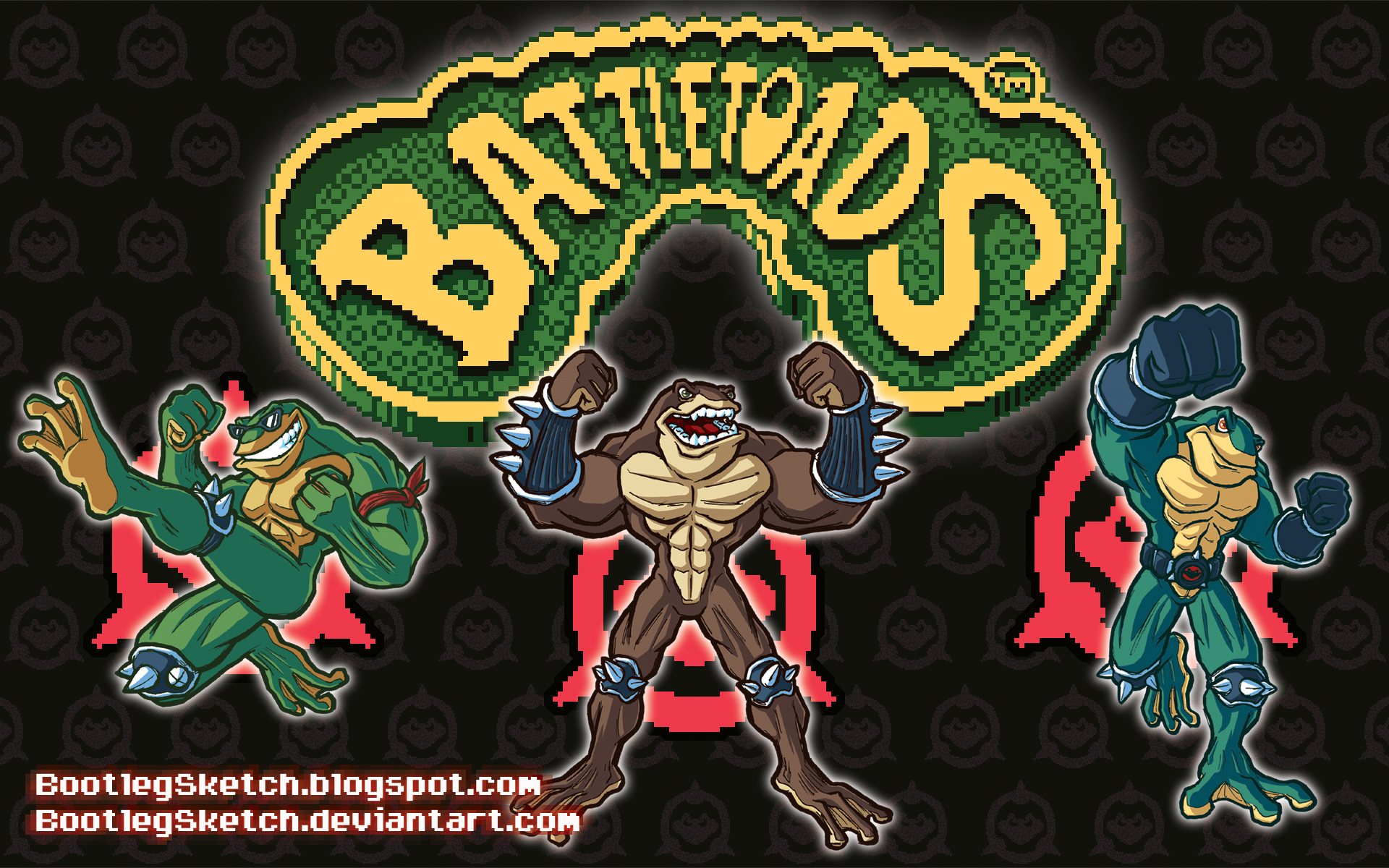 Faker’s original title was “Evil Robotic He-Man Imposter,” but in Faker’s single appearance in the classic He-Man cartoon, he was identical to He-Man and conjured by Skeletor with magic. Combining the technological and magical origins of Faker, and envisioning my take on the character as something of a cross between a zombie and a Terminator, I gave him the title “Evil Relentless Doppelganger.” Relentless is, of course, a nod to how Terminators are frequently described, and doppelgangers are creatures from folklore and, um, Dungeons and Dragons. 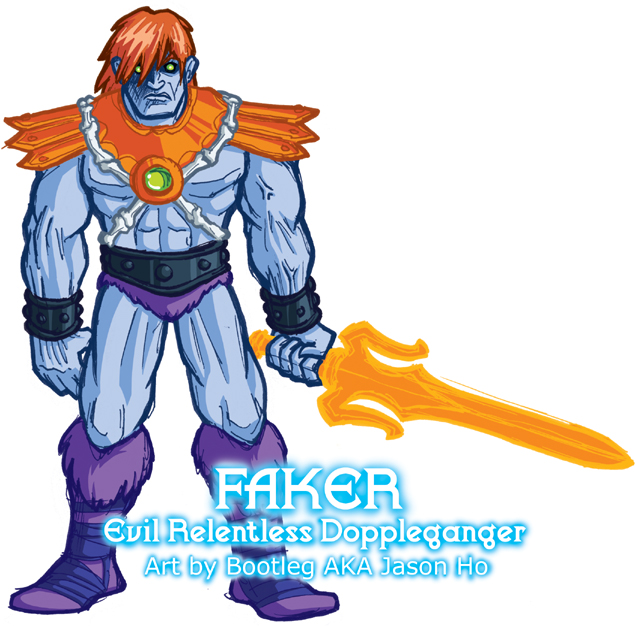 This one is a little unusual for a few reasons–for one, I don’t usually render shadow with line art, and as you can see, one side of his face is pretty heavily hatched. Also, the way I drew and colored the highlights in his hair is different from the more simplistic way that I usually depict hair. I think it worked out alright.

Some notes on the colors themselves–the power sword is supposed to be a mystical construct, generated by Faker’s battle aura. This was an idea I came up with to explain why Faker’s sword would be bright orange. Faker’s green gem and green eyes are supposed to be a callback to my take on Skeletor–if you refer back, you can see that I colored Skeletor’s gem green as well. The idea is that the gem is not merely for show, and serves some kind of mystical function. Since Faker was always something of a cross between He-Man and Skeletor, perhaps it is through the twin gems that Skeletor imbued part of his essence into Faker. If you look to this week’s earlier post, you can see that I gave Evil-Lyn a green gem and green eyes as well–the idea is that she’s drawing on a similar source of power as Skeletor.

I spelled “doppelganger” wrong in the picture. I’m too lazy to change it. I am a bad person.

BUT THAT’S NOT ALL—

With today’s post I’ve completed color sketches of Skeletor’s primary cronies, which is something of a mini-landmark achievement for me. I had always intended to try and make a wallpaper out of them, so here it is, dear reader: 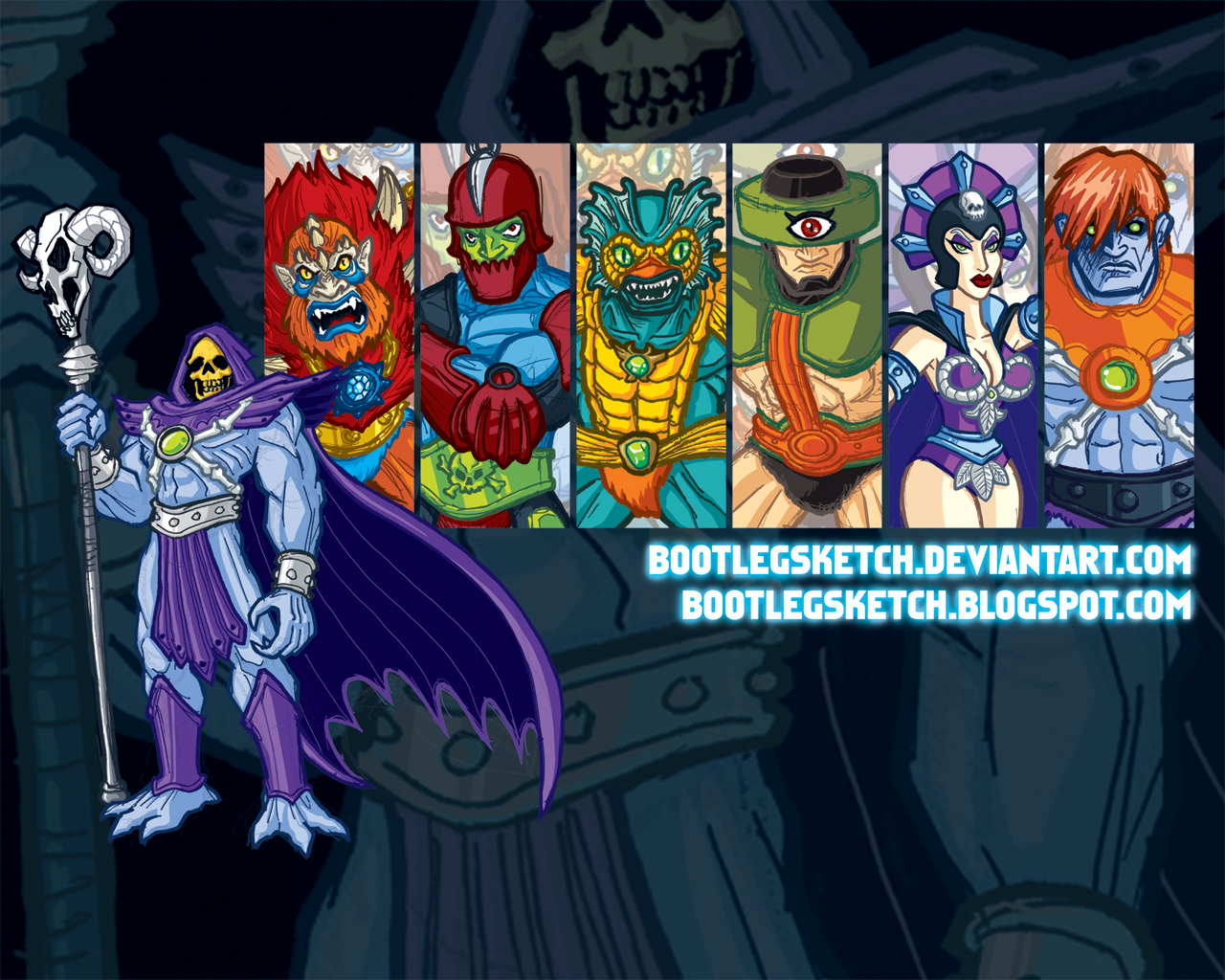 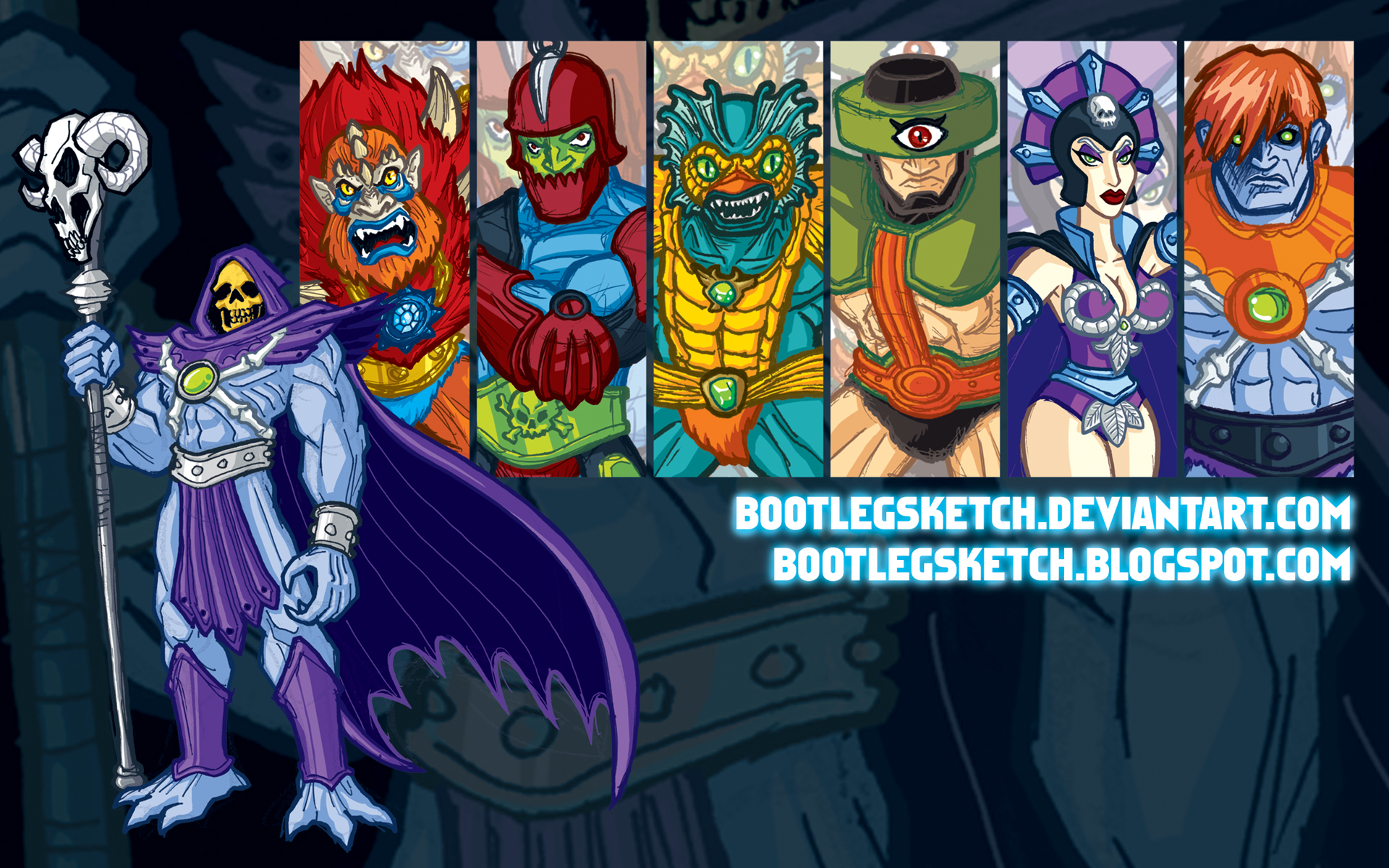 As my sketches accumulate, you can expect more themed wallpapers in the future. Enjoy, and let me know what you think.

Also posted on the He-Man.org fan-art forums in this thread.

Post Script: In case you missed it, I posted a DVD review on Wednesday. Check it out!