It is no secret that I am in favor of well-designed Olympic mascots, even though I have no interest in sports. Mascot design = character design, and that’s definitely something I’m interested in.

The 2010 Winter Olympics (which close shop this weekend) feature a great quartet of mascots designed by the very talented artists of Meomi. Naturally, I wanted to try my hand at drawing these mascots:

Note to self: start drawing picture of Sumi and Miga as Fuzors.

Where was I? Oh yeah, mascots are rad. In the midst of researching the 2010 mascots, I also stumbled across these characters:

Their names are Lyo and Merly, and they’re the mascots for the first ever 2010 Summer Youth Olympics (taking place in Singapore). Lyo is a lion cub, and Merly is a merlion cub–ANOTHER FUZOR!!! Don’t be surprised if I end up drawing these two when the Youth Games roll around.

For More on Olympic Mascots:

You might recall that last year I became obsessed with the Fuwa, official mascots of the 2008 Olympics. I had a few laughs about it, and Mark Hale had a few more. In spite of my trademark disdain for sports/exercise, I watched a little bit of the Olympics over the weekend, and I was disappointed to find that the Fuwa have been conspicuously absent. So, I sat down and busted out a drawing: 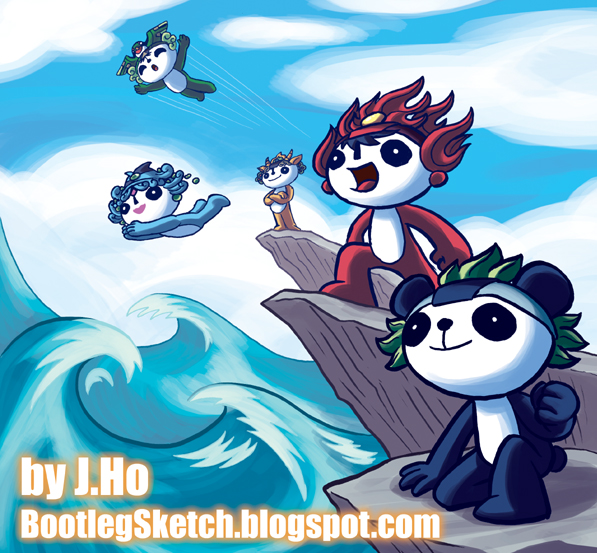 If you’re just here for discussion of awesome mascots, skip down a bit. The next paragraph is gonna be me yammering on about my process.

Several of my cronies have been requesting that I draw more involved pieces, with multiple characters, backgrounds, and, I dunno, cohesive lighting or something. The simplicity of the Fuwa made them ideal for a more complex piece–I got to concentrate on composition and color, rather than obsess over costume details. The composition here is the right idea, but the execution is lacking. All in all, I can live with it, because the entire production of this piece was spontaneous, and for me, pretty fast–the whole thing took me about five and a half hours.

As if it wasn’t enough that the Fuwa are the best official Olympic mascots of all time (you can see their competition here), Ren alerted me to the fact that BBC’s Olympic coverage had a mascot of their own–none other than Monkey:

Monkey, AKA Sun Wukong the Monkey King, is easily my favorite literary character of all time (sorry Batman and Naruto, it was a close race!), so you can imagine that I’d be pretty stoked. But on top of that, who do you suppose provided the art and sound for BBC’s incarnation of Monkey? None other than Jamie Hewlett and Damon Albarn, best know for collaborating on Gorillaz.

A quick non-mascot sidebar–Monkey’s appearance as a BBC Olympic mascot is related to a theatrical production that Hewlett and Albarn collaborated on, featuring the same subject matter, and titled Monkey: Journey To The West. So far it’s only had two brief engagements in London, both of which I contemplated attending, until I realized that I am, if we’re being kind here, not exactly sitting on a mountain of unused cash. Hopefully they’ll take that show on the road! If they brought it to, say, New York, I think I could manage it. But you don’t care about my theoretical travel plans–back to mascots (yes, there’s more)…

ON TOP OF EVERYTHING ELSE, I have also stumbled upon the disarmingly charming mascots for the 2010 Winter Olympics in Vancouver–Quatchi (a sasquatch), Miga (AN ORCA/BEAR HYBRID!!!), and Sumi (a magical animal spirit somewhat resembling an anthropomorphized totem pole).

Lastly, two bonus mascot-ish commercials from the folks at Coca Cola (you probably have seen these, if you’ve watched 5 minutes of the Olympic broadcast, but I like to be thorough). Funny CGI birds do Olympic stuff…

… and LeBron and Yao compare notes on their respective cultures, also in CGI (keep your eye out for the Monkey King!):

We live in a golden age of Mascots.