Skip to content
This illustration was for the second re-design challenge that I entered at the He-Man.org fan-art forums, during the second half of December. My post is here, the whole thread is here, and the voting thread is here. After the results were tallied, I tied for first!

Double Trouble is a character from the She-Ra toyline that never appeared in the cartoon. She-Ra and her allies in the Rebellion were at constant war with the evil Horde, a totalitarian regime that dominated most of the planet Etheria. Double Trouble’s action figure was billed as a “Glamorous Double Agent,” and her action feature was switching her face from good (smiling) to evil (grimacing). And really, I think that’s all kids need to know about morality: 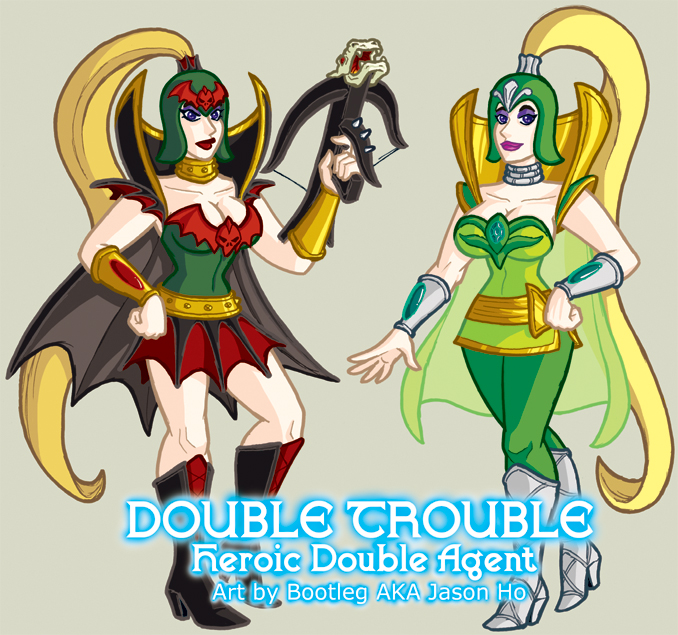 click above for larger view
Inspiration struck when I was looking at pictures of the Double Trouble toy–I noticed that the crest on her helmet, and the symbol on her chest, both had vaguely the same silhouette as the emblem of the Horde (a skull with bat wings). So, rather than having the “evil” version of Double Trouble just grimacing, I designed a complete Horde disguise for her.

The Horde version (left) of Double Trouble is armed with a gargoyle-crossbow thingee, which I assume is standard issue for high ranking Horde officers, because almost all of the Horde action figures came with one. I darkened the green on her uniform so it would be a bit more “military” and added in some red and black to emphasize the Horde theme (for those who do not know, red and black are more or less the colors of the Horde). The end result is sort of christmas-looking, but that was just a coincidence!

The Rebellion version (right) has just has a few tweaks from the original–I added some green on the shoulder pads, and made her bracers and choker silver to match her boots and the accents on her helmet. I’ve never been a fan of the sheer tutus that many of the She-Ra figures had, so instead I made the “skirt” part of a tunic.

BUUUT, that’s not all— Mad props to forum member Super-Munkyboy, who drew a chibi version of my Double Trouble re-design–he even modernized the costume to match up to the more intricate character designs of the 200x He-Man cartoon! (The character on the right-hand side is a Horde villain named Vultak) Super-Munkyboy’s post on He-Man.org is HERE, and his deviant art page is HERE–check it out, he’s taken “chibi” to a whole new level!