Skip to content
Re-design challenge at the He-Man.org fan-art forums for the second half of February–my post is here and the original thread is here. The voting thread is here–I placed second.
The subject is Stridor, “Heroic Armored War Horse.”

The original Stridor toy is a solid, straightforward design without much room for improvement. My solution for the re-design challenge was to instead give him a completely new humanoid transformation. Actually, it’s not too much of a transformation–he pretty much just stands up on his hind legs, and his articulated hands pop out; a few other things shift around, but nothing too complex. To accommodate his humanoid mode, the tail gun is now mounted on the hip, and a protective shield guards what would otherwise be a vulnerable belly. The jousting lance is my addition as well. Color-wise, I stayed pretty faithful to the original–a notable addition being the coppery orange that I used for his joints: 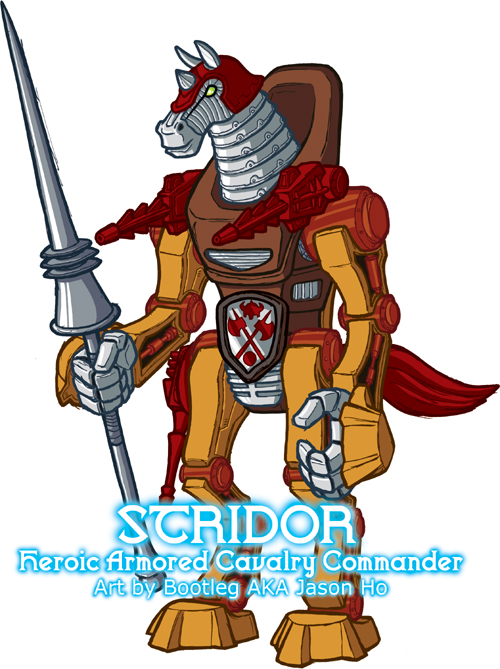 click above for larger view
What’s that? You’re just not getting a feel for my interpretation of the character? The artwork is okay but you wish I had come up with some background info to flesh out and explain my re-design? Well, here ya go:
* * *

PROFILE: On the battlefield STRIDOR is a courageous leader, a shrewd strategist, and a firece fighter. Off the battlefield he is gentle and easy-going. In horse mode he is the size of a large armored war horse, and in humanoid mode, he stands almost twice as tall as a man. His ranged weapons include dual heavy laser cannons, and a rapid-fire hip blaster. His primary weapon in close combat is a heavy jousting lance.

HISTORY: The Stridor Project began in Man-At-Arms’ laboratory as a simple experiment in robotics and simulated AI. His goal was to create a robotic mount with the equivalent of a horse’s IQ, for military use. The Stridor prototype was field-tested by Teela, Captain of the Royal Guard, and over time Man-At-Arms gradually improved on Stridor’s design and programming. The Stridor prototype became the template for a mass-production model that would completely mechanize the Royal Armored Cavalry.

When the Eternian capital found themselves under seige by an army of centaur-like cyborgs–conquerors from the remote planet Equestris–Man-At-Arms engineered an alternate humanoid transformation for the original Stridor prototype, so that he could more efficiently battle this new threat. With casualties running high, and few human soldiers available, Stridor went into battle with his robotic bretheren, a so-called “unmanned cavalry,” and drove the gladiators of Equestris off of Eternia.

However, it soon became apparent to Man-At-Arms that the original Stridor prototype had developed sentience, as a result of the continued improvements to his programming. Faced with a crisis of conscience, Man-At-Arms could only grant Stridor his freedom, rather than forcing him to serve in the Royal army.

For several months, Stridor travelled the lands of Eternia, pondering his place in the world. But when the armies of Equestris returned to Eternia for vengeance, Stridor knew where he belonged. He raced back to the capital and again, lead his robotic bretheren to victory (with some help from He-Man). Stridor was heavily decorated for his heroism, and asked to be reinstated in the Royal Armored Cavalry, under one condition–that the other Stridor models be given humanoid forms and the freedom to choose their path as they developed sentience. King Randor and Man-At-Arms gladly agreed.

Stridor was made Commander of the Armored Cavalry, and he has come to regard Man-At-Arms as his father, and Teela as his sister. Eventually, all of the Stridor models developed sentience, and were granted humanoid forms and freedom, and have chosen individual names for themselves. To this day, you can see Stridor’s descendants mingling with the other denizens of the lands of Eternia. Most have opted to serve the kingdom, but more than a few have chosen a path of their own.

In Case You Were Wondering: