Skip to content
Re-design challenge at the He-Man.org fan-art forums for the first half of March–my post is here and the original thread is here. The voting thread is here–I snagged a first-place vote… sweet!

The subject today, is the mother of Mekaneck‘s son Philip. I phrase it like that because she is a character who was neither seen nor referenced in the old He-Man cartoon. The only inference of her existence is the existence of Philip. In fact we don’t even know if Philip is Mekaneck’s biological son. But for the sake of my entry, I make the assumption that Philip is the biological son of Mekaneck and this classy lady: 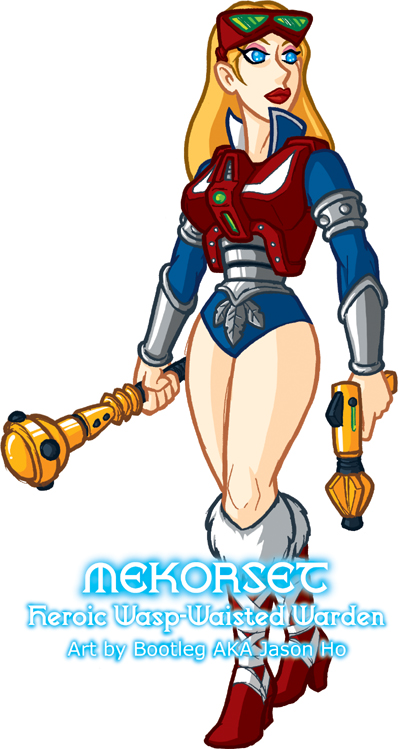 click above for larger view
The design of “Mekorset” is really just based on pre-existing elements. Her armor and goggles are extrapolated from Mekaneck himself, and the rest of the costume elements are swiped from Teela/Evil-Lyn. The club and pistol are weapons from Man-At-Arms and Zodac, respectively, re-colored to match Mekaneck’s club, and modified just slightly. The name “Mekorset” is a contraction of “mechanical” and “corset,” the same way Mekaneck’s name is a contraction of “mechanical” and “neck.” Where Mekaneck has the ability to extend his neck, his better half can extend her midriff. Pretty clever, yes? No? Right.

What you are looking at is essentially the very first drawing I did of this character. I’m pleased with how it turned out–yes, it’s a typical static girl-pose that you would expect from me, but something about her stance is natural and relaxed (well, relatively relaxed, considering that she’s armed to the teeth). And it’s always nice when you get something on the first try.

The colors, on the other hand, are pretty bland, I think. The colors of her uniform follow Mekaneck pretty closely, and she has blonde hair to match her son. The lighting is even less dynamic than usual, but I didn’t want to spend a ton of time on a really obscure character who’s the estranged wife of a second-stringer. How do I know that she’s estranged, you say? I’m glad you asked–read on for some background info, nerdily composed by yours truly!

* * *
PROFILE: In her public life, MEKORSET is a steadfast yet just authority figure, well-loved in the territories that she oversees. In her personal life she is fiercely devoted to her family. She is equipped with a bionic midriff that can extend up to 10 feet–beyond making her a “human periscope” like her husband, she also uses the ability to enhance her hand-to-hand combat abilities. Her goggles provide her with a variety of enhanced visual senses–telescopic vision, nightvision, thermal vision, video recording and transmission etcetera. Her light battle bludgeon is standard issue to Eternian military, but her sidearm is a special model engineered by Man-At-Arms from off-world technology. In close and ranged combat, Mekorset is surpassed by few.

HISTORY: Mekorset and her husband Mekaneck, were both injured when trying to to track their son Philip through a violent storm generated by the evil sorcerer Count Marzo, who had kidnapped Philip. The couple each received bionic prostheses which not only saved their lives, but gave them new powers. However, the loss of their son, compounded with the fact that they had married at a very young age, caused excessive strain on their marriage. Mekorset, as she was now called, became one of the King’s wardens, and transferred to a distant outpost, overseeing some of the King’s territories on the frontier.

In the aftermath of Mekaneck discovering and rescuing Philip from Count Marzo, Mekorset has reunited with her son and her estranged spouse. By decree of King Randor and Queen Marlena, Mekorset was transferred to an outpost closer to the Eternian capitol (roughly half a day’s ride on a Stridor unit) where she remains one of the King’s most trusted Wardens. Mekaneck, who still serves as a special agent in the reconaissance division of the Royal Guard, now lives with his wife and son at the outpost. Mekorset and Mekaneck are currently seeing a marriage counselor, and seem to be well on their way to rebuilding their family. Their son Philip recently became a junior recruit in the Royal Guard.

Further Tangential Fan Speculation Regarding Mekaneck’s Family: Some folks on the forums pointed out that another Philip who showed up might be the same Philip as Mechaneck’s son, though no reference is made to corroborate this.

Also: Yes, I realize this is all ridiculous, but as you ought to have guessed, I have unsurpassed affection for nerdy and obscure things. IT’S JUST WHO I AM… O_O

4 thoughts on “Mekaneck’s Wife Is Hott!”