I was watching my She-Ra DVDs, when something about the villain Hordak caught my eye–what’s up with his crazy duck feet? Check out this post on Busta Toon’s blog to see what I’m talking about. Anyways, a hilarious image popped in my head and I came up with this: 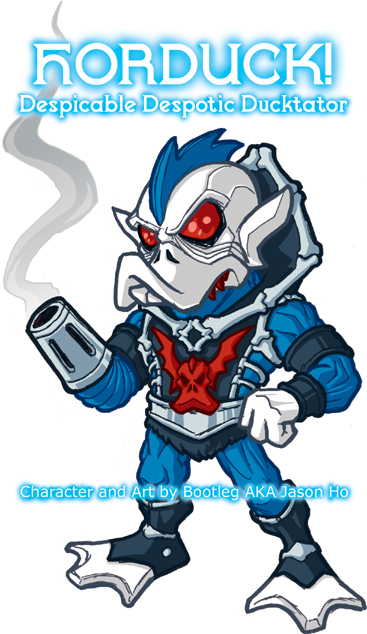 I actually drew this several months ago, just after Christmas, I believe, and had left the colors in mid-progress. But when Super-Munkyboy started an art jam challenging entrants to turn a superhero or villain into animal, vegetable, or mineral, I thought this would be appropriate. I will update with a link when Super-Munkyboy posts the other entries.

The colors on this sucker follow Hordak’s animation model pretty closely. Same with the costume details, with the exception of the obvious, you know… duckification. I’m happy with how the smoke turned out–I’ve been playing around a little with incorporating gradients recently, rather than sticking strictly to two-tone cell-shading.

So originally this was intended to just be an anthropomorphic version of Hordak, but then I got to thinking–given the level of silliness in the old He-Man and She-Ra cartoons, Horduck could easily be incorporated into that universe! And so:

PROFILE: As a result of his technological and magical enhancements, HORDUCK is capable of shapeshifting in the same manner as Hordak, though his range is more limited. He has enhanced strength and stamina, and possesses thermal vision. Horduck is a classic bully with a Napoleon complex. He sincerely idolizes Hordak, and Hordak, as a result of a huge ego, humors this behavior. However, Horduck and Imp loathe eachother, as Imp percieves (correctly) that Horduck seeks to usurp his position as Hordack’s trusted messenger and protege.

HISTORY: A sickly slave from Hordak’s homeworld, the tiny despot who would become known as Horduck was the subject of experimentation by Modulok. Emerging from the experiments with enhanced powers and strength, he was raised by Shadow Weaver and Hordak, and indoctrinated in the ways of the Horde. Although he constantly claims to be a “Ducktator” of the outer territories of Etheria, in reality he’s merely the officer in command of a small Horde expeditionary force. Currently, he and his squadron are terrorizing a colony of Sagarian Trobbits. The Trobbits however, have allied themselves with the local Twigget population, and a group of Eternian Widgets who’ve found themselves stranded on Etheria.

And so, DUCK WEEK(TM) draws to an epic conclusion! In case you missed it, I did post a Duck-related review on Wednesday–scroll down to check it out. Stay tuned for more Bootleg Sketch Mega-Events(TM) in the near future!