Skip to content
I am notable in that I am one of the few people in all of geekdom who has not seen Ed Wood but has seen Plan 9 From Outer Space. Someone lent it to me recently, so I was inspired to draw Vampira: 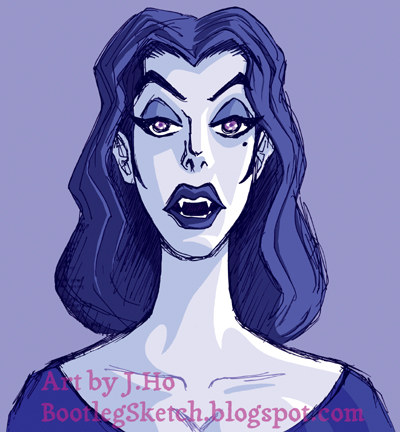 This was sketched in pen (no preliminary pencils of any kind) on a piece of scratch paper, and touched up a bit in Photoshop. If you look carefully, you can see some text gibberish in her hair–I could have cleaned it up, but decided that it gave the piece an interesting quality. In retrospect, the text is so tiny, I don’t think it makes a difference one way or another. When I drew this I wasn’t looking at any reference, and with that in mind I think its a halfway decent likeness. I don’t know what made me color the picture monochrome, but I think it worked out alright.

And now, a five second review!

For those who have not seen Plan 9 From Outer Space, I just want to say that it is far from being one of the worst films of all time. It is filled with flaws, riddled with continuity errors, and is unintentionally laughable. In spite of all that, or because of all that, it’s still, like, totally watchable. In fact the pacing in Plan 9 has better pacing than most of the movies I’ve seen in the past two and a half years. No joke!

For More B-Movie Awesomeness: An Italian movie from 1963, Atom Age Vampire is a work of genius!