With this post, I’m wrapping up my first batch of Masters of the Universe variants re-cast as new characters. There are still a lot of variants to tackle (and I will!), but for now I’ve covered the main classic variants. Allow me to present a lady codenamed Flying Fist, with accesories and armor courtesy of Flying Fists He-Man. 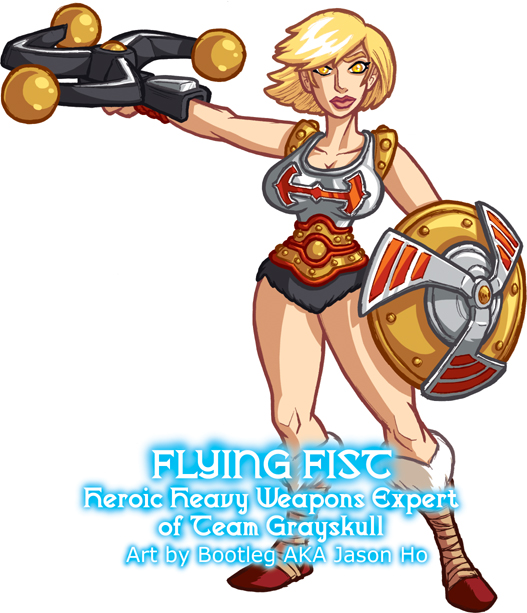 The original Flying Fists He-Man figure was not particularly feminine, but once I re-cast Terror Claws as a female, it made sense to give Team Grayskull another woman warrior as well. As far as the costume itself, I combined the redundant double-belt of the action figure into an armored girdle. The perspective on the shield is messed up, but I can live with it. Color-wise, I initially had some difficulty making things mesh, but once I decided to make her furry barbarian short-pants black (instead of brown), the rest of the colors really clicked into place. The end result is pretty faithful to the original color scheme (with the exception of the aforementioned furry barbarian short pants). Now how about a bio for this little lady?

PROFILE: Peace-loving and kind, ADELINE, known on the battlefield as FLYING FIST is essentially a gentle but fair soul who has taken on the role of protector. She is strongwilled, but when faced with failure she has a tendency to blame herself.

Adeline’s mechanized triple flail can pulverize granite and break solid plate armor, while her rotating shield is capable of generating a defensive barrier of wind, or firing an offensive whirlwind blast. When held aloft, she can utilize it as a limited one-person helicopter, and in the past she has also used the shield as an improvised boat propeller. The flail and shield are both semi-magical items, requiring the input of the user’s chi for proper use.

Adeline wears an armored girdle that grants her the strength of a storm giant, and an enchanted breastplate that conforms to the shape of its wearer, allows for a full range of movement, and provides magically enhanced stamina. However, even without her girdle, she has an abnormal level of strength. The cause of this is unknown.

HISTORY: Adeline hails from a serene and remote village in the foothills. Her mother Adele was famed amongst the locals for using her tremendous strength as the village’s protector, earning her the nickname “Flying Fist.” For the most part, the village was peaceful, and Adele used her strength for mundane tasks such as helping with construction and demolitions and clearing fallen trees. Occasionally some small-time bandits would show up, or a bear would wander too close to town, but all in all it was a peaceful existence. Adeline knew that her mother’s strength came from the magic girdle, though her mother never explained where the girdle came from. And when Adele passed away, some five years ago, Adeline inherited the girdle and the role of village protector. It wasn’t long before Adeline inherited the nickname “Flying Fist” as well.

Following another dream-vision, Teela visited Adeline’s village with Team Grayskull in tow. Adeline had long been in possession of a magically locked chest belonging to her mother, and with the help of Teela’s magical powers, she was finally able to open it. The chest contained a breastplate marked with an ancient heraldic symbol of Grayskull’s line. After this, it quickly came to light that Thunder Punch was in fact Adeline’s father, and like Thunder Punch, Adeline’s mother Adele had once been a champion of Castle Grayskull. Initially, Thunder Punch was vehemently opposed to involving his daughter in the struggle between the protectors of Castle Grayskull and its would-be conquerors. However, the Sorceress convinced him that while it was not Adeline’s inevitable destiny, it was the legacy of both her parents, and she had a right to choose for herself.

Adeline had planned to reject the invitation to join Teela’s group, but after witnessing a battle between Team Grayskull and some Horde Troopers, she understood the bigger picture–in order to protect her village, there was a bigger world outside of it that needed protecting as well. With a tearful goodbye, Adeline bid farewell to her village.

Shortly after arriving at Castle Grayskull, Adeline came across a room with two broken and discarded mechanical devices. In her village, Adeline’s strength made her ideal for carrying out repairs on large structures like windmills and water wheels, so she had developed something of a sense for mechanics–she tinkered with the devices a little, and was able to restore them to perfect working order, and even improved them with some minor modifications. Thus, the mechanized triple-flail and rotating shield became Adeline’s primary tools in combat. When Team Grayskull isn’t searching for He-Man or battling the forces of evil, Adeline often spends her hours trying to repair the ancient technologies contained in Castle Grayskull, with the “assistance” of Orko..

All things considered, Adeline has adapted to life with Team Grayskull rather smoothly. At times, her relationship with her father is strained, but overall, Adeline and Thunder Punch are both doing well in mending their estranged relationship. Teela has become a surrogate big sister to her, and Orko and Cringer are both very fond of her. There’s something of a brewing romance between Adeline and Battle-Scar, at least when Battle-Scar isn’t attempting to rile her up by calling her “She-Man.” Such behavior generally earns Battle-Scar a punch in the nose.

I didn’t like Flying Fist much as a name, but at the same time I didn’t want to drop it completely. I finally decided on giving the character a ‘real’ name (Adeline) and using Flying Fist as a nickname, kind of like Duncan/Man-At-Arms. Adeline and Adele are both variations of a German name, meaning “noble,” and chosen to be evockative of the ad sound in Adam and Adora (the real identities of He-Man and She-Ra respectively). The relationship between Adeline and Battle-Scar is somewhat meant to mimic that of Akane and Ranma from Ranma 1/2. Man, these character bios keep getting longer and longer. :P