Skip to content
This will be my final post based on Horde Prime for the foreseeable future, promise.

I’ve seen two versions of Horde Prime as he appeared in comics in the UK, each with a different color scheme. I made each of them into new characters, Praetors of Hordak and Horde Prime’s homeworld. Their weapons were my idea. 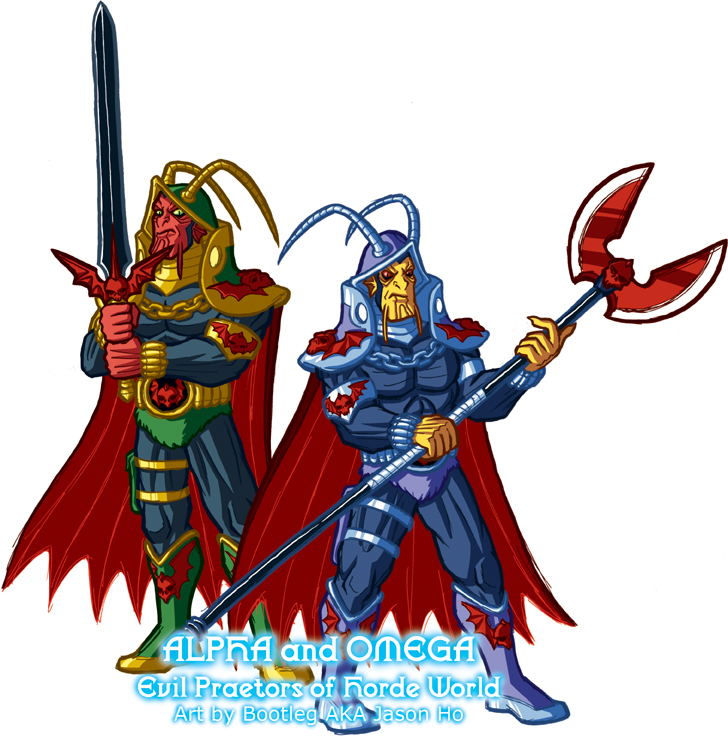 I’ll be honest, the drawing of these was a somewhat hasty process. I was trying to keep it fast and loose, but instead it got sloppy. I think the colors helped pull it together somewhat, and I’m glad I was able to tweak the original color schemes, while sticking pretty close to the source material. Here’s the nerdy bio…

PROFILE: The harsh enforcers PRAETOR ALPHA and PRAETOR OMEGA are, in reality, genetically modified clones of Horde Prime. Horde Prime is over a thousand years old, and the biology of the Praetors matches that of Horde Prime as a young man–therefore, while Alpha and Omega are extremely skilled warriors with some knowledge of combat spells, they have not yet developed Horde Prime’s advanced magic and shapeshifting abilities. Both of them are merciless in the performance of their duties, though an instinctive mutinous streak is gradually surfacing in both of them.

HISTORY: While it is widely known that Alpha and Omega were genetic experiments raised and trained by Horde Prime in secrecy, their secret genetic heritage is unknown to all but Horde Prime and his trusted follower Ifreet.

Disappointed in Hordak’s failure to crush resistance on Etheria, and having placed Zed (the Crown Prince of the Horde) under house arrest for being a rebel sympathizer, Horde Prime is looking at the very real possibility of placing Alpha and Omega in the line of succession. Already, they are entrusted with the stewardship of Horde World, while the newly regenerated Horde Prime leads the Eternian invasion in person.

Hordak does not suspect the true origins of the Praetors, but he is very wary of them. Hordak is aware that his failures on Etheria put him in grave danger of losing favor with his brother, and he senses his brother’s favoritism for Alpha and Omega. Away from the eyes of his all but his most trusted advisors, Hordak has begun to plan the execution of the Praetors of Horde World.

Also posted here on my variants thread on the He-Man.org fan-art forum.