Skip to content
Very quickly, for those of you who can’t get enough of me: Karen was kind enough to ask me eleven questions, and post my answers on the Paper Lotus Blog. I hesitate to call it an interview, because that would imply that people have any idea who I am or have any interest in what I have to say, but nevertheless you can read the post HERE.

Make sure you check out the rest of the Paper Lotus blog and Karen‘s own blog too! And in case you want to know what kind of a person Karen is, she gave me some cheeseless (vegan, I think?) macaroni and cheese today, and it was delicious.

Today’s post is another He-Man piece. Actually, it’s multiple He-Man related pieces combined into one giant montage for a re-design challenge at the He-Man.org fan-art forums. The subject is the Talon Fighter and Point Dread. The thread is here, my post is here. The voting thread is here–my entry landed first place! 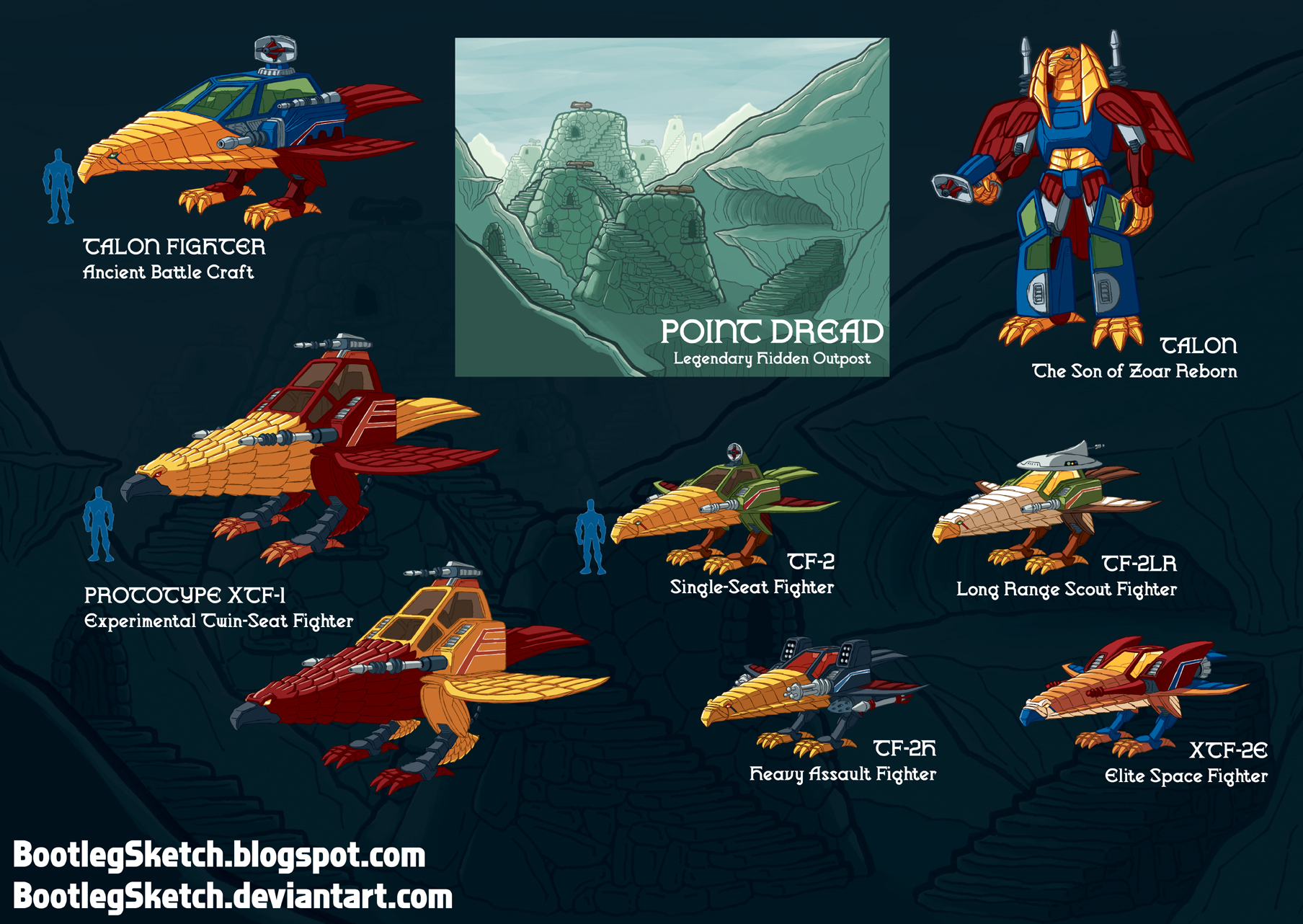 Now, how about some in-depth, in-fiction info?

Point Dread: In the distant days of King Grayskull, the children of Zoar the falcon god flew freely in the sky. These giant birds of prey were friends to good, and enemies of evil. Point Dread, was originally a meeting place for the children of Zoar and their humanoid allies, an outpost against the forces of evil. Today, Point Dread has been reclaimed by a small force commanded by Man-At-Arms, once again establishing an outpost against the many dangers that threaten Eternia. The giant perches where Zoar’s brood once roosted are now occupied by squadrons of Talon Fighters.

Talon Fighter: Talon, Zoar’s youngest child, was an ally and close friend of King Grayskull. He was widely known for his bravery, but also for his stubborn recklessness. Disobeying his father’s warnings of caution, Talon fell in battle, mortally wounded. Zoar would not heal his foolhardy and arrogant son, so King Grayskull ordered his followers to rebuild Talon’s body from sacred metal that had fallen from the skies. Even in his new form as the Talon Fighter, the son of Zoar was willful and reckless–only his good friend King Grayskull could calm him and fly him into battle. In the modern age, only He-Man can pilot the Talon Fighter, due to his genetic lineage to King Grayskull.

Talon, the Son of Zoar Reborn: With He-Man missing, and Eternia in dire need of heroes, Zoar has decided to give his brash son another chance to prove himself. Talon’s consciousness has been fully restored, and he can shapeshift freely between the the shape of the Talon Fighter and his new humanoid form.

Prototype XTF-1 (Experimental Twin-Seat Fighter): Charged with fortifying Eternian defenses in the face of invasion, Man-At-Arms has been researching new technologies from Point Dread. Seeking to duplicate the awesome power of the Talon Fighter in a more controllable form, Man-At-Arms and his team of scientists and engineers created the XTF-1. Mass-production of the XTF-1 was scrapped, but its creation did eventually lead to the development of the TF-2 series. Only two XTF-1’s are in existence, and are still used on a limited basis. The XTF-1 has speed and firepower comparable to the original Talon Fighter, but has slightly weaker armor, reduced maneuverability, and poor fuel efficiency.

TF-2 Series (Mass Production Single-Seat Fighters): With the help of newly discovered partial blueprints from the original Talon Fighter, and the Sorceress’s arcane knowledge, Man-At-Arms has successfully perfected a Talon Fighter design suitable for mass production. Faster, and drastically smaller, the TF-2 series are invaluable in the aerial defense of Eternia against the forces of evil. Several variations have arisen for specific uses, including the TF-2LR (Long Range Scout Fighter), and the TF-2H (Heavy Assault Fighter).

XTF-2E (Elite Space Fighter): Still considered to be somewhat experimental, though already approved for field use and eventual mass-production, the XTF-2E is the crowning achievement of Man-At-Arms’s Talon Fighter program. Capable of space flight, and equipped with the latest in hi-tech armaments, only 15 XTF-2E’s are in existence. Talon Fighter pilots are already regarded as elite amongst the Eternian military, and the pilots of the XTF-2E are regarded as the elite among the elite. Historians may also note that while Man-At-Arms and the Sorceress had begun to slowly rebuild their personal relationship during the development of the TF-2, it was during the development of the Elite Space Fighter that the two finally rekindled their long dormant romance.

If you picked up the Simpsons reference in here, you get a gold star. Two gold stars if you know which episode it’s from.