Hang on–here comes another convoluted nerdy ramble from yours truly. I like to make things complicated, don’t I?

There’s another re-design challenge at the He-Man.org fan-art forums. The subject this time is Teela, as she appeared in The New Adventures of He-Man. This version of Teela had almost no resemblance to previous versions–however, I liked the character design so much that I decided to just draw a straight-up interpretation rather than a re-design. Because I didn’t change the design aside from a few details, I didn’t enter her in the challenge, but I did give her a new name and persona, and post her in my variants thread instead. The post is here. And while I didn’t enter the re-design challenge, there are some awesome entries, which you should definitely check out. 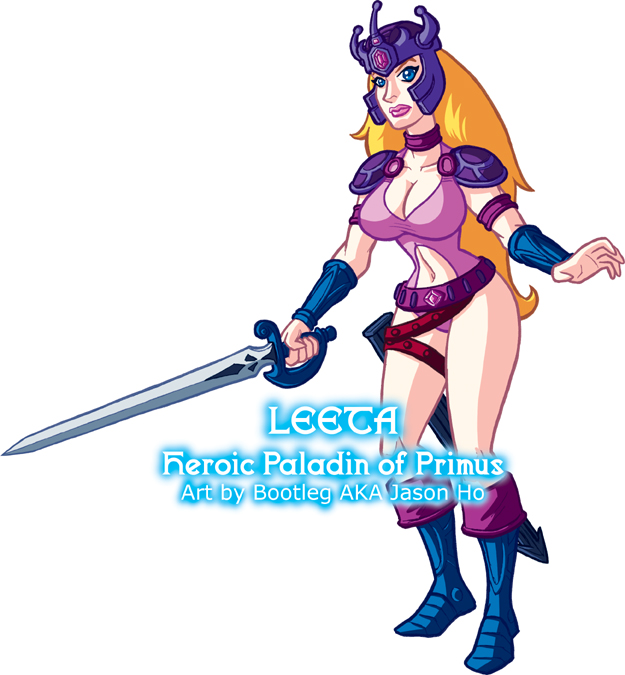 I’m happy with how this one came out, especially her somewhat relaxed-yet-ready-to-kick-ass pose. The colors (which are loyal to the source material) are somewhat cliche in their “girliness,” but ultimately I think it’s a good color scheme. I can take no credit for the great details of the costume–the slick-looking sword, the arrowheaded scabbard, the multi-pronged helm–everything was present in the original design.

The new moniker, Leeta is an anagram of Teela. I do have a bit of a backstory thought up for her, but it requires me to reveal some other plot points of my own concoction, so presented below is a bare bones version of her bio. And just in case anyone is keeping score at home, in my interpretation of The New Adventures of He-Man, Primus is merely a distant planet, not a future locale requiring time travel.

PROFILE: An invaluable member of the Galactic Guardians of Primus, LEETA is a Paladin belonging to the order of an ancient warrior goddess. Having shed the headstrong recklessness of her youth, Leeta is a disciplined master warrior, with amazing sword skills, and strong leadership abilities. Her strength and speed appear to be significantly beyond ‘normal’ levels. Leeta is a friend and frequent sparring partner to Mara.

HISTORY: Not long after Leeta first joined the Galactic Guardians, He-Man and Master Sebrian were able to negotiate peace between Primus and Denebria. With true stability established, He-Man was finally able to begin his long journey back to Eternia. Years later, the people of Primus discovered that He-Man never made it back to his home. Indebted to the Eternian hero for bringing peace to their solar system, the leaders of Primus and Denebria assembled a joint task force to find the whereabouts of He-Man. Leeta was one of the first to volunteer, and acts as one of the top lieutenants, under the task force commander.

One thought on “Pretty (Dangerous) in Pink”