Drawn for a re-design challenge at the He-Man.org fan-art forums. The subject is Gygor, a never-made concept for a He-Man toy, as described by a former Mattel employee. Read up on Gygor, and check out the other entries in the challenge’s thread. My post can be seen here. First round polls are here and here. Final poll is here. 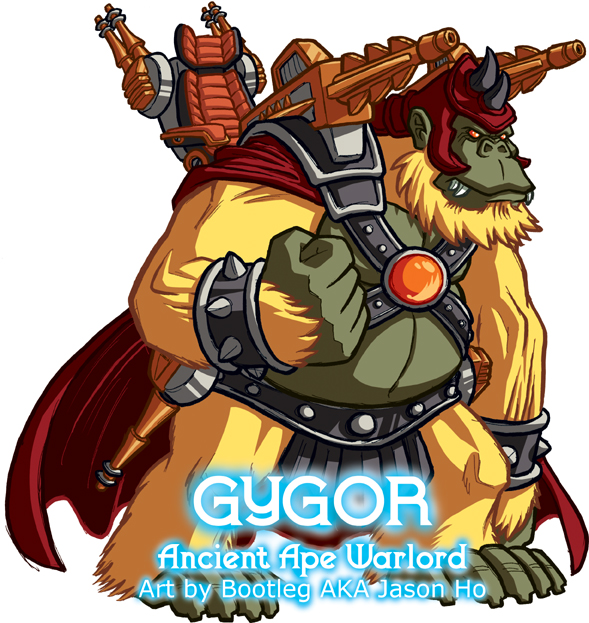 It was tough making the colors from Gygor’s description work. Maybe they don’t work? On the other hand, the description of Gygor’s colors very much paralleled the garish colors of Battle Cat, so maybe if the colors don’t work that means they are working? Anyways, I designed Gygor’s helmet to mirror Battle Cat’s as well. The guns are all modelled on Stridor‘s armaments. The chair mounted on Gygor’s backpack should give you a sense of his scale.

A garishly colored giant gorilla decked out in a cape and high-tech energy weapons… hmmm… something’s missing. Oh, I know–how about some supplemental nerdy background info, written by yours truly? Here you go:

PROFILE: Standing at well over 13 feet tall, the ancient being known as GYGOR is one of the most powerful entities on Eternia. His physical strength surpasses that of He-Man, his wisdom rivals that of the Sorceress, and his knowledge encompasses aeons of Eternia’s rich history. His helm is made from the hide of a powerful prehistoric Eternian beast, and he is outfitted with a battle harness powered by an enchanted gem. The harness is armed with two heavy shoulder blasters, two hip mounted stun rays, and rotating light rapid fire blasters mounted on the back turret. Gygor rarely needs to rely on more than his brute strength and great wisdom, but he has also demonstrated powerful spellcasting abilities from time to time.

HISTORY: Gygor was already ancient in the days of King Grayskull, and in fact, records indicate that Gygor was a staunch ally and advisor to the legendary king. Allegedly, in modern day Eternia, Gygor has been sighted travelling towards Castle Grayskull. Has Gygor returned to aid the heroes of the land in the dark times that have descended upon Eternia? Only time will tell…

One thought on “Ape in a Cape”