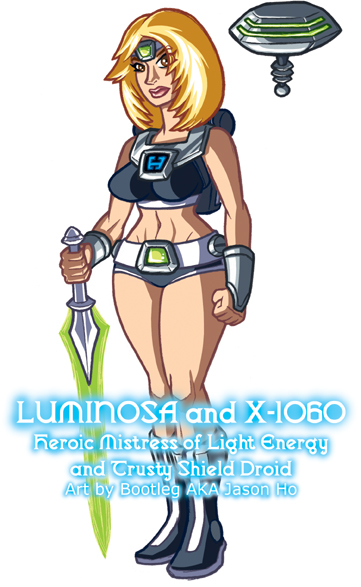 Her sidekick, X-1060, is named after the product code for Laser Power He-Man, and his form is based loosely on the backpack of one of the prototype versions of that same figure. To answer your question–yes, it did just get nerdier in here.

And it’s about to get even nerdier… BACKGROUND INFO!!!

PROFILE: While a bit naieve and idealistic, and slightly reckless at times, LADY LUMINOSA is nevertheless a bright and determined young woman, with a keen sense of justice. She is somewhat sheltered and knows it–which makes her eager to seek out the world. Luminosa is close to her cousin, Prince Lazeros, who is both big-brother-figure and mentor to her. She has adventured in Etheria a few times, befriending young freedom fighters like Sorciela and Korujito, and finding strong female role-models in the older generation of freedom fighters.

In battle, Luminosa is armed with equipment similar to Lazeros–a synthetic Korodite-powered battle harness, and an energy sword. Her energy sword is actually a conduit that channels her innate powers into a blade of energy far more powerful than Lazeros’s. Between this device, and her incredible fencing abilities, Luminosa is very dangerous in melee combat. Though Lazeros is still her fencing instructor, he believes her swordfighting skills alone will one day overshadow his own, and once she learns to channel the full potential of her energy powers, she will be a truly unstoppable force. Luminosa’s battle harness is much more compact than Lazeros’s, but as a result does not provide as much enhanced strength, and provides no field of protection. This lack is compensated by X-1060, a lab droid modified by Lazeros to generate a portable forcefield and act as a protector for Luminosa. X-1060 is intellectual and fretful, constantly lamenting Luminosa’s willful nature and thrill-seeking.

HISTORY: Lady Luminosa was born to a noblewoman, and a low-born, but reknowned wizard. Around her thirteenth year, she began exhibiting the ability to manipulate light energy. Four years later, her ability was growing exponentially more powerful, but she could not control it. Her father failed to treat the problem with magic, and so they turned to science, and to Luminosa’s older cousin, Prince Lazeros. Lazeros became Luminosa’s temporary guardian, and began overseeing her education while studying her abilities. Using a modified version of his own battle harness, Luminosa’s powers have been contained so that she can gradually learn how to control them. However, when it became apparent that Luminosa also had an innate knack for science, Lazeros gladly recruited her as his research assistant. To Lazeros’s chagrin, Luminosa (athletic and adventurous, much like her cousin), was more interested in gallantry than science, and stowed away on several of his adventures. After Luminosa had proved herself useful on more than one occasion, Lazeros reluctantly decided that his strong-willed young cousin was enough of an adult to accompany him on his many quests.