First off–if you’re here because of my Tron Calamari post from two weeks ago, welcome! I got a few re-tweets regarding that post, not the least of which were from renowned Twitter maven Bonnie Burton, and the official Star Wars Twitter account! So a big thanks to Bonnie, the folks at @StarWars, everyone else who re-tweeted me, and everyone who dropped in to look at my blog (both new and long-time readers). And of course, another big thanks to my crony Dave, who came up with the title Tron Calamari.

Secondly–I was in a bit of a rush last week, so I didn’t get a chance to mention what I thought about Tron: Legacy–so how about a five second review?

Tron: Legacy (In theaters in 3D and IMAX 3D)

The dialogue was mostly very standard for a special effects blockbuster, with occasional moments of brilliance (often via Jeff Bridges’ unexpected moments of channeling the Dude/himself). The 3D was uneven and generally not a big deal–though I’ve heard a lot of people say otherwise–your mileage may vary, as projectionists at individual theaters may not have their gear properly calibrated. The pacing and performances were strong, and the special effects and art direction were pitch perfect. But most importantly, this movie knows what it is, where it came from, and isn’t ashamed of it.

Verdict: Awesome. I had fairly high expectations, and was pleasantly surprised to have those expectations satisfied. A big bucket of black glass, neon piping, and FUN!

For More Computer World Adventure: Track down the original Tron, or watch some Reboot (coming to DVD soon, by the way!).

And now back to our abnormally scheduled nerdiness:

So, the tradition around here is that I draw up a Skeletor or He-Man (or some version thereof), and post it to commemorate the New Year. Well, I wasn’t sure which version to go with, and as I sat here looking at the menagerie of action figures on my desk, it occurred to me that the Masters of the Universe Classics version of Orko (character info/figure) would probably be the only figure I would keep if I had to sell off my He-Man collection. This in turn made me realize that Orko is one of my two favorite He-Man characters (the other being the Sorceress). True, Orko was most often relegated to the role of goofy sidekick, but I always thought he looked cool, had a cool species backstory (he’s a member of the inherently magical Trollan race from another dimension), and as a character, he always had the potential for more. Anywaysss… here he is: 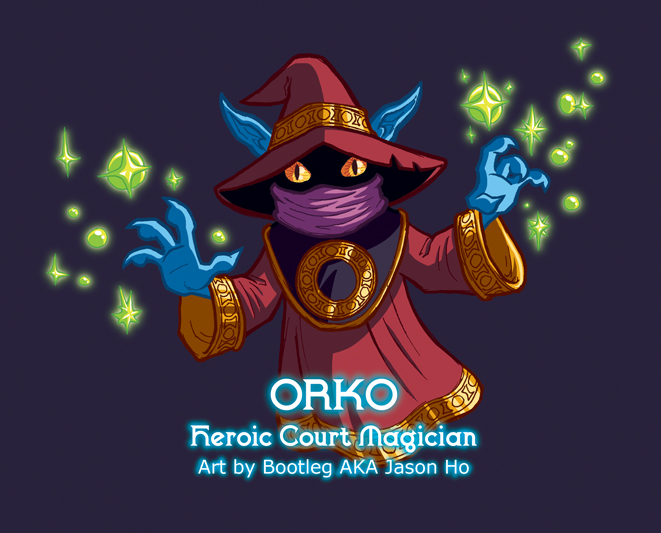 I threw in some costume elements from the 200x version of Orko, but mostly kept his classic proportions. The big “O” on his chest, while iconic, was always a bit too goofy for me–so I styled it as a circular magical ward. Yes, I know, I’m splitting very nerdy hairs in regards to what’s goofy and what isn’t. Perhaps most significantly, I changed up his eyes, to give him more of an otherworldly quality. I don’t think Orko should ever be played as “dark” or creepy, but giving a character an alien look can add a little edge to him, without changing his personality.

I think this is a huge improvement over my earlier depiction of Orko’s lady friend, Dree Elle.

Happy Nerd Year, everyone! (Note: that was intentional, not a typo. You nerds.)