As promised, here is my take on the toy version of Modulok: 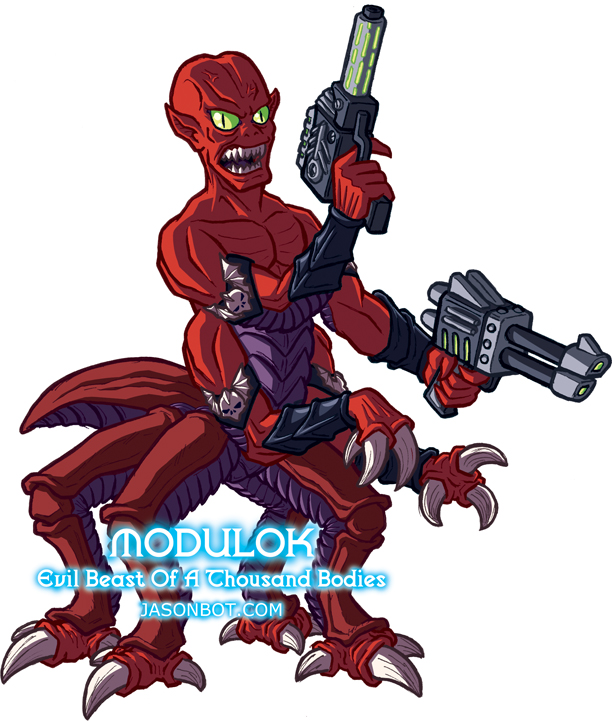 I added some Horde-emblem armbands to Modulok, but colored them in white rather than the standard red, since Modulok already has plenty of red going on. Also, I envision Modulok as being loyal to Hordak, so the emblems are also a subtle cue that Hordak is beginning to build a faction of loyalists to rebel against his elder brother Horde Prime.

The Modulok toy came with two heads, so I couldn’t resist creating yet another version of the character, utilizing what I always thought of as the alternate head:

This guy is supposed to have a leaner build than your average Masters of the Universe character–think of a luchador or a cruiserweight wrestler. This calls for a little nerdy character bio, am I right? I’M RIGHT!

PROFILE: Silent, and relatively small in stature, MODUOS hardly appears threatening. However, when his master and clone-father Modulok is threatened, Moduos explodes into action, demonstrating his mastery of exotic grappling maneuvers and acrobatic striking techniques.

When creating him, Modulok tampered with the development of Moduos’s brain, resulting in Moduos being a machine-like drone. Moduos is not protective of his master–he is simply programmed to react. However, what Modulok has failed to understand is that Moduos is gradually developing a higher awareness and has begun to silently observe and question the world around him.

HISTORY: The cruel and brilliant scientist Modulok originated from a planet that has been enslaved by the Tyranid swarms for thousands of years. He escaped from the rule of the Tyranid, and travelled light years away where he encountered Hordak and the forces of the Horde. These two disdainful and evil beings clashed, but each quickly found himself respecting the other. Hordak appointed Modulok as his lead scientist, and Modulok shared stolen Tyranid technology with Hordak, as well as warning him of the creeping Tyranid fleet.

Hordak correctly assessed the Tyranid as a serious threat, in spite of their long distance from Horde territory. He attempted to inform his brother and leader, Horde Prime, but was dismissed out of hand. The seed of discord was planted in Hordak’s heart, and ever since that precise moment, Hordak has grown increasingly malcontent with his brother’s leadership. Modulok has used this to his advantage over the years, manipulating Hordak in the hopes of pitting the Horde against the Tyranid.

Behind Horde Prime’s back, Hordak and Modulok have formulated a plan for Modulok to infiltrate Tyranid-Space with a small force of elite Horde agents, with the goal of gathering intelligence and carrying out high risk sabotage missions and terrorist attacks. Ultimately trusting no one but himself, Modulok created a clone offspring to be his bodyguard for this extended mission–and thus was Moduos born.

Yeah, that’s right, I included a little incidental Warhammer 40K crossover action in that bio. So what?