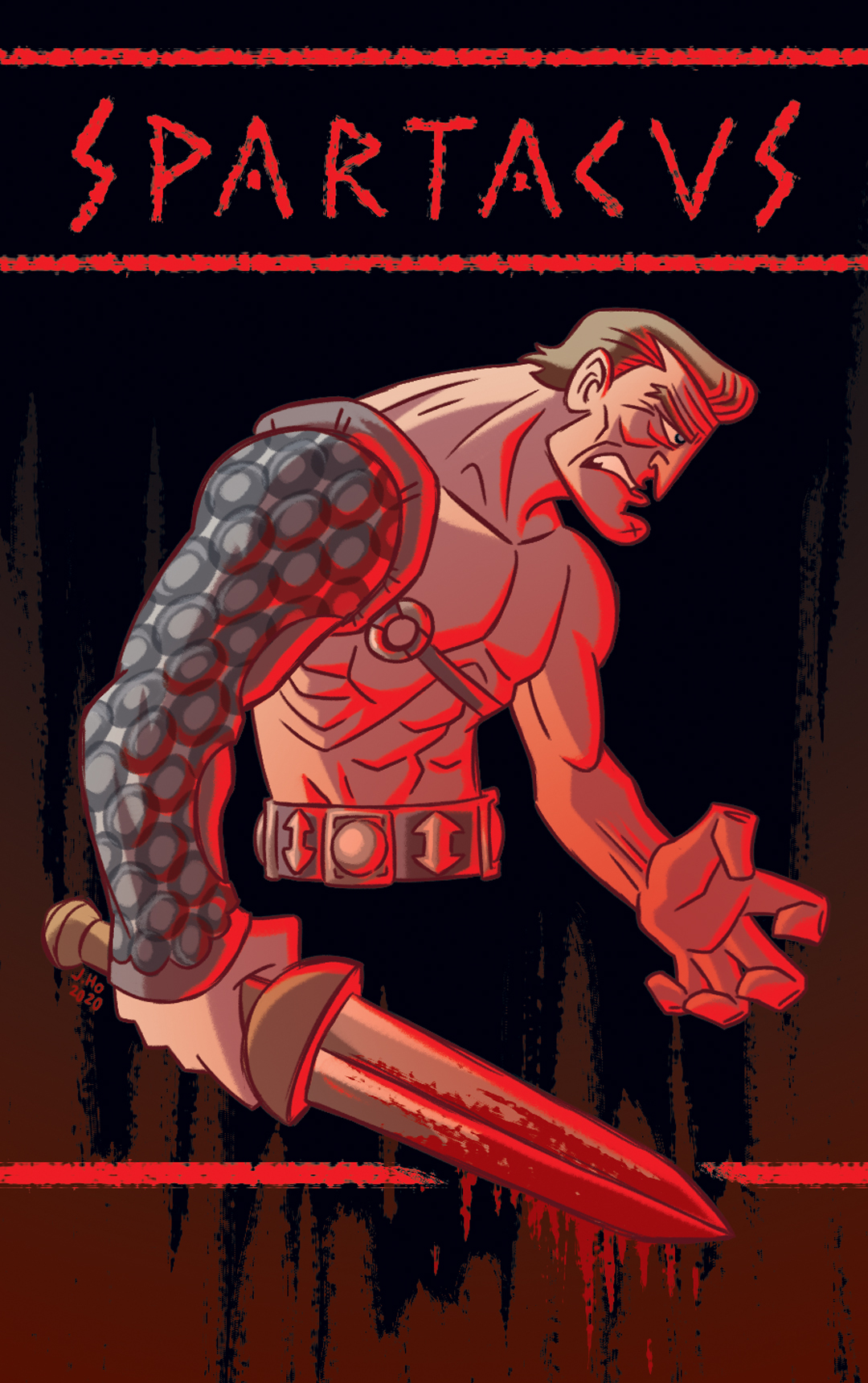 On very rare occasions, I can be coaxed into providing artistic favors! It helps if it’s something I want to draw! 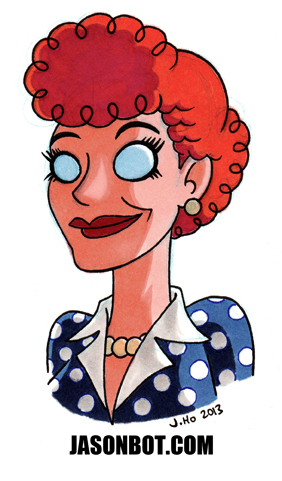 I have probably seen every episode of I Love Lucy… at least 5 times? I wouldn’t be surprised if it was closer to 10. *FLEX*

Here’s the nineteenth round of commissions that I’ve finished for Help the Cheerleader. To read more about my involvement with this fundraiser, please CLICK HERE and HERE

Here’s the fourteenth round of commissions that I’ve finished for Help the Cheerleader. To read more about my involvement with this fundraiser, please CLICK HERE.

Here’s the fifth round of commissions that I’ve finished for Help the Cheerleader. To read more about my involvement with this fundraiser, please CLICK HERE.

Yes, that’s the second commission of Colossus that I’ve posted, which shows that the people requesting commissions aren’t just awesome and generous, they also have excellent taste in X-Men!

Here’s the second round of commissions that I’ve finished for Help the Cheerleader. To read more about my involvement with this fundraiser, please CLICK HERE.

So I’m posting on a Sunday for what was supposed to be a Friday post. But at least my post was late becauseI was actually drawing, right? Right?? Anyone?

Here’s the first round of commissions that I’ve finished for Help the Cheerleader. To read more about my involvement with this fundraiser, please CLICK HERE.

We rollin’. Come back this Friday to see more commissions. And I’ll be prepared to post on time! 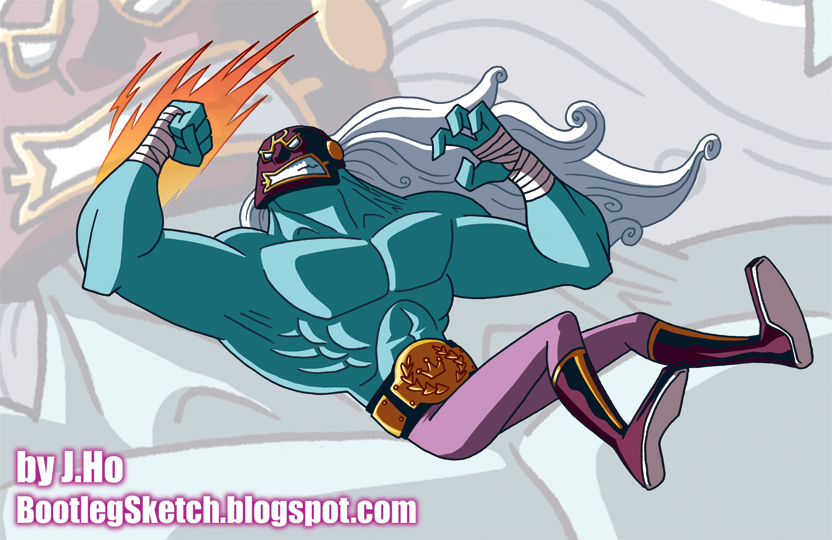 MACHO WEEK continues, with a piece of vintage nerdery from my archives, drawn and colored in 1999. TWELVE years ago.

Let’s think about this people. That was before 9-11, before the dot-com bust, before the (still ongoing) energy crisis, before I owned a car or a DVD player. I was fresh out of college, just starting out full time at the day-job after interning there for 2 years (same day-job that I have today, by the way), and living in a tiny studio apartment that paradoxically had a huge walk-in closet (which I filled up with comic books and action figures–mostly Beast Wars at the time).

So… I confess, this was drawn to impress a geeky girl who I was talking to at the time. Believe it or not, the subjects in the illustration were our common points of interest–and there’s the Macho One himself, front and center! Oh, and I’m in the picture too, inbetween Optimus Prime in Pikachu, because apparently I have a raging ego. For what it’s worth, I think the girl was in fact impressed by this. However, things didn’t work out for a number of complicated reasons which I will not bore you with. You know how it goes. 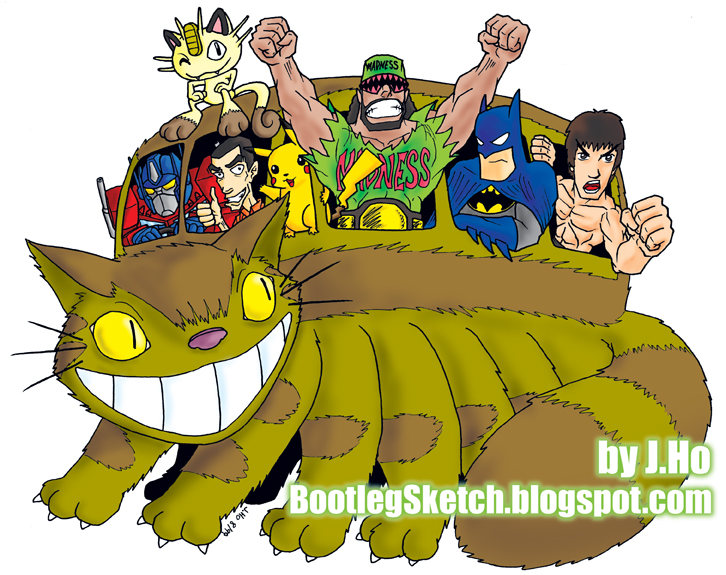 Man, just look at this thing. It was one of the first things I ever colored in Photoshop, and I thought I was pretty hot stuff, using the Dodge/Burn tool to render the shading. WHAT WAS I THINKING?

And yet, here we are, twelve years later. My drawing is a little better, and my coloring is much better. And I still pretty much won’t shut up about Macho Man, Transformers, Batman, Pokemon, Miyazaki movies, and Bruce Lee.

Tune in on Friday for the final installment of MACHO WEEK!!!

I’m officially declaring this week to be MACHO WEEK. Make it a MACHO one everybody, for Randy. OH YEAHHH! DIG IT!

I tweeted that on Monday. Of course, I have no authority whatsoever, and I then failed to do anything about it for the first two days of the week. But better late then never, right?

Of course you’ve heard by now that Macho Man Randy Savage has died. The buzz on Twitter about him was overwhelmingly positive and affectionate. And if you ask me, it all felt pretty sincere. I apologize for obnoxiously re-tweeting myself, but I think my thoughts about Macho Man’s passing are best summed up by my tweets on Friday:

Was texted on the way in to work with request to bring in Slim Jims for the office. Currently snapping into a Slim Jim w/ co-workers. #macho

Heard Black Machismo retired his Macho Man gimmick, so I think I should live the rest of my life as Yellow Machismo to honor Randy Savage.

I love when Macho Man would turn his back to the camera while cutting a promo. So pimp.

Guys we should not be mourning the man’s death but celebrating THE MADNESS! It’s what he would have wanted! OH YEAHHH!

This one is for you Macho Man!!! 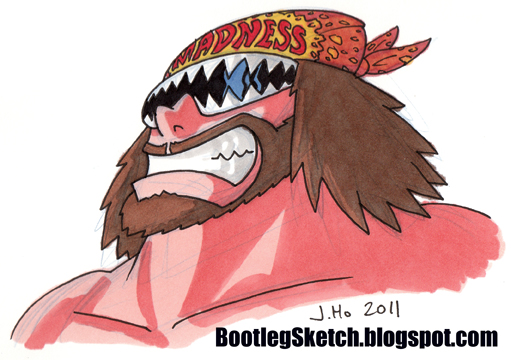 Since I resumed blogging, I’ve only been posting once a week, but this week I will be posting not once, not twice, but THREE times! That’s two more MACHO posts coming your way! OH YEAH!!!

(Posting early while the topic is still somewhat topical…)

I’m usually too slow and apathetic to take on internet memes or trends, but this time, it’s serious bidniz. That Conan O’Brien (AKA Cone-Zone AKA Cone Bone AKA CoCo AKA Conando) isn’t just funny, he’s also shrewd and classy. 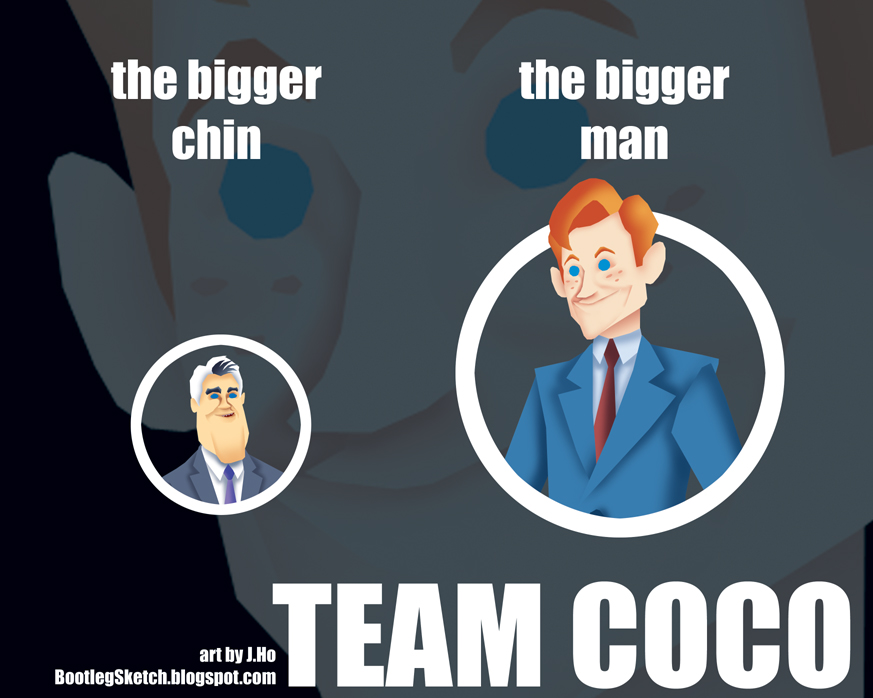 EDIT: I submitted this to Gawker.TV‘s Pro-Conan fan-art gallery, and they were kind enough to include it! Check it out HERE.

To wrap up this series, here’s everyone’s favorite Corellian smuggler: 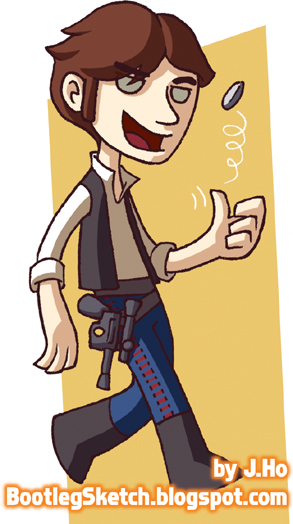 And for your enjoyment, here are some wallpapers, available in both fullscreen and widescreen formats: 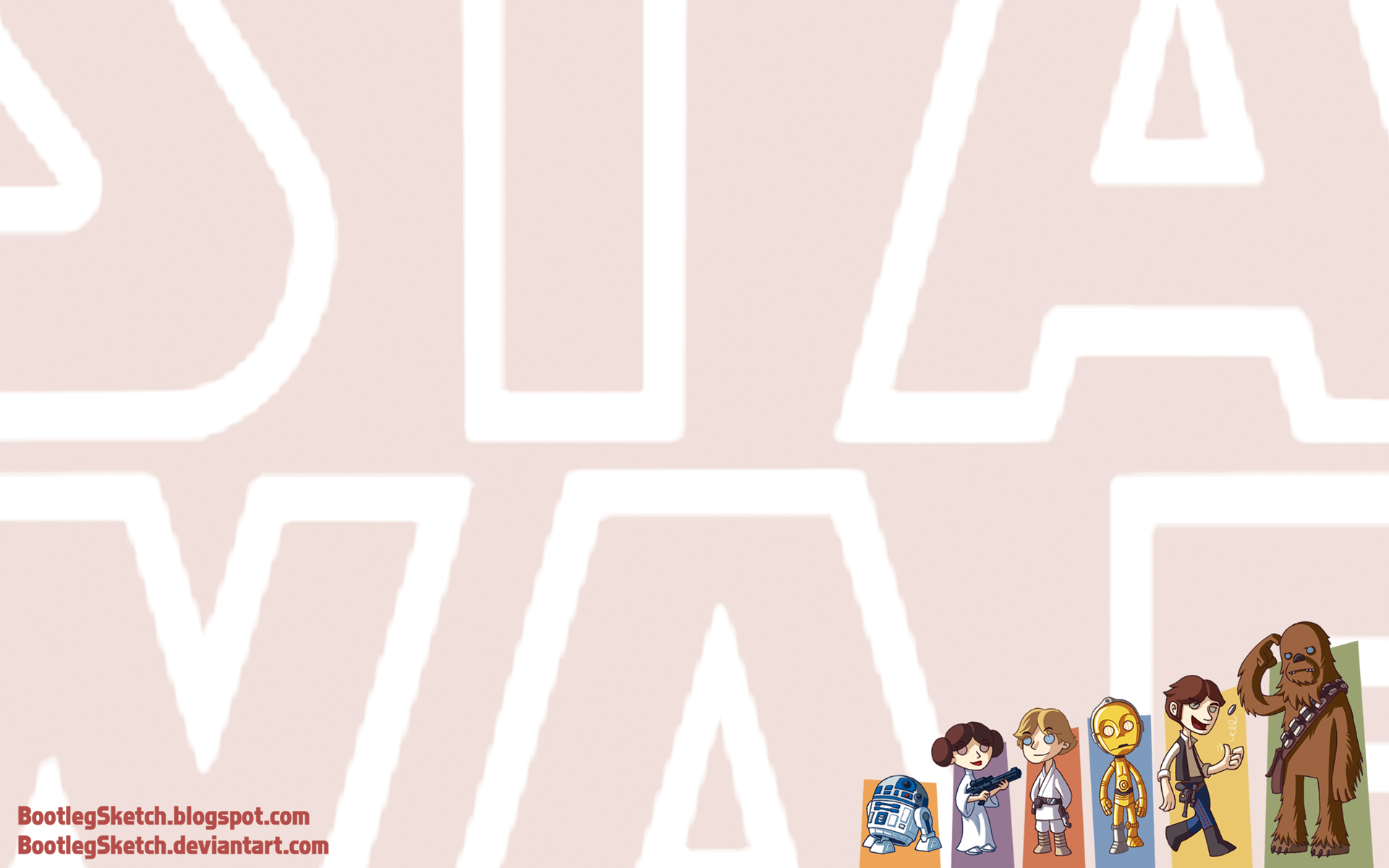 I was just reading over the past few posts and realizing how monotonous I have become with saying how I had nothing to say. And yet, I have nothing to say! Here’s C3-PO:

See you on Friday for the conclusion of this series. I’m not sure what will follow immediately, but I have a bunch of Street Fighter pieces in the works, a neverending supply of He-Man stuff (naturally), and a smattering of other random nerdy sketches. And as always, thanks for looking in!

The great thing about Star Wars (I’m talking Original Trilogy), is that the characters really require no introduction. 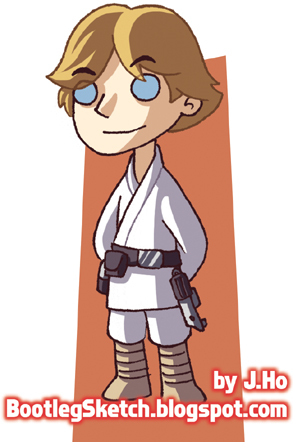 I’m feeling so laconic these days, so I guess you’re spared from my yammering once again.

This series of sketches basically requires no explanation. Here is today’s: 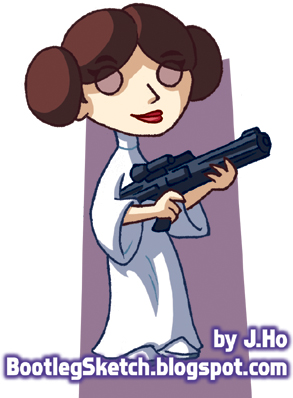 Due to exhaustion, words fail me. Peace!

He’s puzzling over a Dejarik problem, I think: 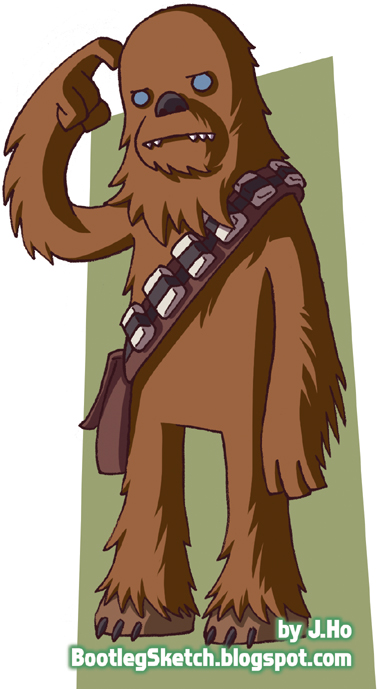 Me being busy = you being spared my pointless words. Soak it in.

Plug first, sketch second–you all know my crony/chum Hammers, right? He’s better known to the world as Nathan Hamill, and he’s been interviewed on StarWars.com regarding his participation in the most recent series of Star Wars Galaxies trading cards. Click HERE to read it.

And as an unintentional coincidence, I’ve prepared a series of Star Wars sketches for the next few weeks. Here’s R2-D2: 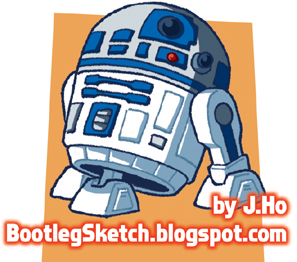 You can imagine what might be coming up in the ensuing weeks. And if Star Wars isn’t your cup of tea, you philistine, stay tuned for more Street Fighter and He-Man after I wrap these up.