These sketches are a thank you gift, and I started out basing my drawing on reference photos of the toy. It’s been a while since I watched Beast Wars, so I didn’t realize that the animation model was so different–many of the character models in Beast Wars are more similar to their toy counterparts. Unfortunately, it wasn’t until I finished inking the sketch that I figured it out.

I could have scrapped the toy-version sketch, or jury-rigged it by using the colors of the animation model, but it was so close to being done I just decided to finish it and then start the proper version separately. The cartoon portrayed Rampage as a distinct character with a bit of complexity, so I wanted to acknowledge that with a more accurate drawing.

(These sketches will count as my two for this week. Holding steady at 3 missed posts. More in the pipeline, so I should catch up soon… )

An unscheduled random doodle–something I drew based on a brief Twitter exchange with @The_TCC:

Unless you’re a serious Transformers nerd, this will probably not be interesting to you. But in case you’re interested, I took a SHARKticon and turned it into a SNARKticon. I know, genius, right?

Nothing to see here, move along…

July 29, 2008 ~ J.Ho ~ 2 Comments
Comic-Con was insane, as usual. The drive from Los Angeles to San Diego took almost 7 hours (yes, seven) instead of 3, and as a result, at one point, I whizzed in a bottle (yes, a bottle). For the record, it was an empty Vitamin Water lemonade bottle, which was nice because it gave me, you know, a sense of symmetry. The rest of the convention proceeded with no unorthodox waste removal procedures. I’m catatonic right now, so you’ll have to wait until my next post for non-whizz-related highlights from the convention.

For now, to commemorate the recently ended Comic-Con, a ‘Con: 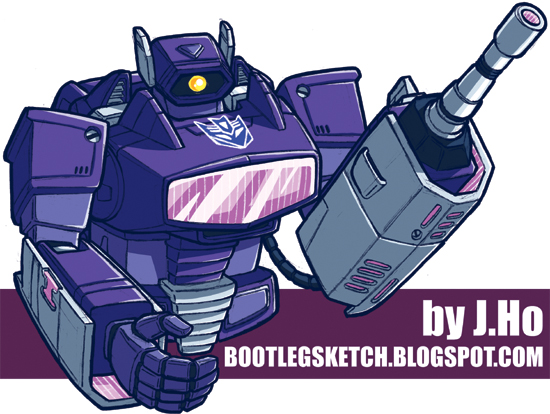 This is Shockwave, drawn with a modified transformation that I came up with. The original toy had a gun barrel which was essential for the gun mode, but served no purpose and had no venue of storage in robot mode–my revised transformation imagines that the gun barrel could split apart and slide back on Shockwave’s arms. That’s all. Sleepy-time now.