Skip to content
For the uninitiated, this is kind of a complicated one. In the She-Ra cartoon, the bad guys were a totalitarian regime known as “The Horde,” and they were lead by a cyborg-ish guy with a skull-like face named Hordak. Skeletor, incidentally, was originally Hordak’s apprentice, but I digress. Hordak’s boss was an entity named “Horde Prime,” who was also supposedly Hordak’s brother. The only pieces of Horde Prime that were ever seen by the viewers were two glowing eyes and his gargantuan metallic hand (whether armored or robotic, we don’t know). And the only reference to his appearance mentions that he has two heads. Aside from the cartoon, there are also one or two minor and completely contradictory appearances of Horde Prime in the UK comic books.

All in all, this has lead to a lot of discussions amongst He-Man/She-Ra fans about the nature and appearance of Horde Prime. Here is my interpretation: 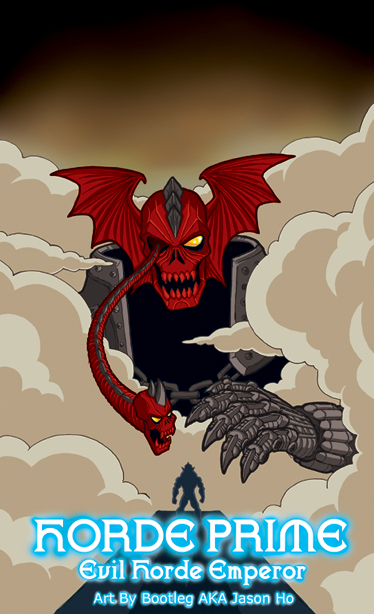 click above for larger view
A lot of hardcore He-Man/She-Ra fans don’t like Horde Prime, because he takes away from the impact of Hordak, who was always billed within the toys as the leader of the Horde. The strongest argument of opponents of Horde Prime is this:

If Horde Prime was the leader of the Horde, then why was Hordak’s face on the emblem of the Horde?

And this is what got my geeky little brain rolling. The basic assumption that I make in my illustration is this: it is not Hordak’s face on the Horde emblem. For my version, the armor was based on the UK comic book version, while the hand was based on the cartoon depiction. His head and face are, of course, based on the Horde symbol (or by retro-continuity, the basis for the Horde Symbol). As for the secondary head, I just wanted to give him his extra head in an unexpected way. Oh, and I assume that Horde Prime is, like Hordak, a shapeshifter, so the secondary head can retract and morph back into an eyeball. I view Horde Prime as Hordak’s brother, who started out roughly-human sized like Hordak–over time, his shapeshifting abilities developed further, and eventually he was able to use his powers to increase his size.

The discussion thread about Horde Prime on the He-Man.org art forums is here, and my post is here.

For more on Horde Prime:

2 thoughts on “Surprise! A Nerdy Fan-Art on a Friday Afternoon!”