Okay, enough with the small talk–today’s entry is Tri-Klops, another evil minion of Skeletor: 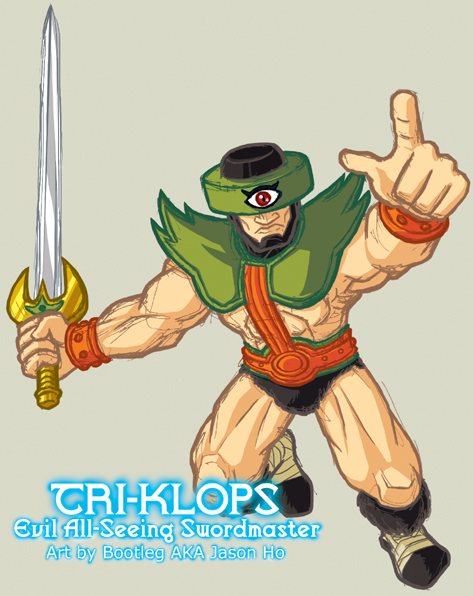 click above for larger view
This was kind of an odd one–I started with a really messy sketch, which was so heavy with blue pencil that i couldn’t go over it with ink to tighten it. I was able to do a slightly-refined-but-still-very-messy ink sketch over that. I scanned that in, and tried inking it in Photoshop, but that was too clean compared to the other sketchy He-Man pics that I’ve been drawing. So I cleaned the scanned ink sketch a bit (but obviously retained a level of sketchyness to be consistent with my other drawings), and merged that with the “too clean” Photoshop “inks” to get the final line art. That whole process didn’t take as long as I might have made it sound, maybe an hour or so. The coloring of Tri-Klops was basically uneventful.
This pose is a little more dynamic than the others I’ve posted so far… still a bit awkward, but for the time it took me, I’m basically okay with it. As usual, I took a few liberties in depicting the costume details and colors. I merged the harness of his armor with his belt, because I felt that the design on the original toy was a bit redundant, and I made the green parts of his armor more olive, because I felt this matched the orange better. In a nod to the 200x design, I “covered” his neck. I also changed the colors of his sword, but I’m not sure how I feel about the result.
As for the title “Evil All-Seeing Swordmaster,” well, I’m kind of freestyling there. The original tag for the action figure was “Evil and Sees Everything.” Skeletor is a “Lord of Destruction,” and Merman is an “Ocean Warlord”… all Tri-Klops gets is the same description that I would use to describe a nosy neighbor? Not very intimidating. So anyways, I tried combining what is known about the character to create a more menacing title, while trying to stay within the style of the original toys.

As usual, this was posted on the He-Man.org fan-art forums. My post is here, the entire thread (including my Skeletor sketch) is here.