Skip to content
As a companion piece to the Horde Prime redesign that I posted earlier in the week, here is a fan character that I created, Ifreet (named after the mythological entity): 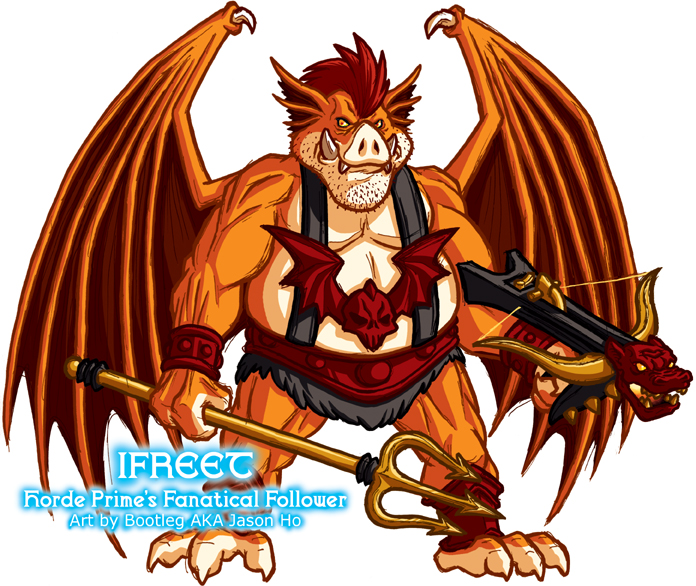 The idea here is that Horde Prime and Hordak‘s race have a symbiotic relationship with Imp‘s race. Ifreet is one of Imp’s kind–but where Imp is still a mischievous adolescent, Ifreet is a fully matured specimen. Further explanation in the overly detailed bio:

PROFILE: Horde Prime is infrequently seen without the zealot IFREET at his side. And one can be certain that if Ifreet is absent, he is carrying out the orders of his master. Unquestioning in his loyalty, Ifreet plays a role for Horde Prime analagous to the role that Imp plays for Hordak–something of a cross between pet, valet, yes-man, messenger, and herald. But where Imp’s diminuitive size gives him the added role of spy, Ifreet’s imposing stature instead allows him to perform the function of bodyguard. He stands at close to nine feet tall, is capable of breathing hellfire, and has the natural shape-shifting abilities of his race (but unlike Imp, his shape-shifting is focused on combat rather than disguise). In addition to his innate abilities, consider that his regular armament includes a stun trident and an elite Horde bowcaster, and you will realize that there are few warriors in the galaxy who could prevent Ifreet from executing his master’s will. However, Ifreet essentially has no identity outside of his servitude to Horde Prime.

HISTORY: Having been Horde Prime’s trusted servant literally since before Hordak was born, Ifreet has a unique and envied position within the Horde, in spite of lacking “official” power within the Horde hierarchy. Even Hordak resents Ifreet, much in the way that Hordak’s underlings resent Imp. Now, in the wake of Horde Prime’s regeneration and rebirth, Horde Prime is himself leading the invasion of Eternia, which means that both he and Ifreet are more visible and present, resulting in further resentment amongst high-ranking Horde officers. All in all, Ifreet refrains from abusing his advantaged station, however, those foolish enough to defy his master earn Ifreet’s eternal enmity.