Skip to content
First of all, no, this is not a picture of the Pink Panther and Snagglepuss.

Second, I know you ladies are all wondering, how does a guy who spends his Saturday drawing pink kitties manage to stay single?

Anyways… today’s post was drawn for a re-design challenge at the He-Man.org fan-art forums. The thread is here, my post is here. The first round voting polls are here and here, and the final vote can be found here–I placed 4th out of the finalists. 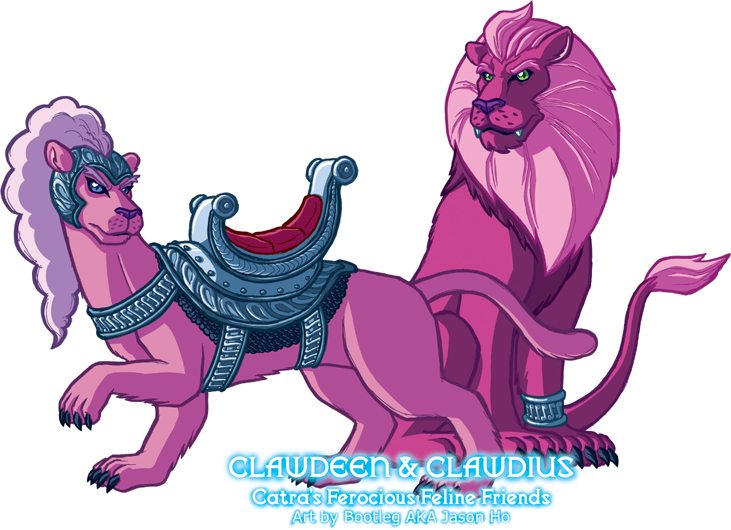 The subject is Clawdeen, the feline mount of She-Ra’s foe Catra. There has been a lot of debate about Clawdeen’s gender, owing to the fact that the toy is identified as a “she” and has feminine-looking eyelashes, in spite of otherwise resembling a male lion (it has a mane like a male lion, however it lacks a tuft on its tail). In contrast, the cartoon version simply looks like a male lion (I don’t recall if its gender is ever specified).

My solution to the gender question was to make the toy and animation versions of Clawdeen into separate characters. The toy version, retaining the name Clawdeen and the specified female gender, gains an armored helm–I leave it to the reader’s imagination whether the plume of hair is Clawdeen’s mane, or simply a part of the helm. The cartoon version becomes Clawdius, Clawdeen’s mate. I swiped the name from Lion-O‘s dad.

I did my best to make Clawdeen feminine without resorting to the heavy-handed shorthand that the original toy suffered from (eyeshadow, long eyelashes). With Clawdius, I was striving for a groomed, submissive feel, to contrast the feral and somewhat crazed look of Manticore. Considering I had the handicap of working with almost nothing but variations of the color pink, I’m pretty happy with how the colors turned out.

2 thoughts on “Pink Panther and Snagglepuss!?”