Skip to content
Let’s dial up the nerdiness here… a while back, I had an idea for the Green Lantern Corps which could never ever be officially made–the gist of it was to populate the Corps with aliens from various science fiction franchises. And even though it could never be officially produced, I still drew up a bunch of character designs. Yes folks, this is how I choose to spend my free time.

These sketches were done quite some time ago–for the first installment, a Skrull and a Wookie: 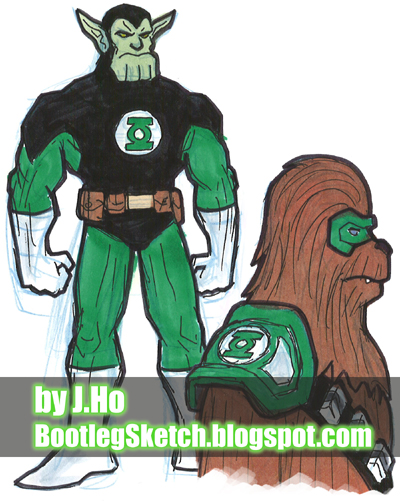 As you might notice, these are blue pencil sketches, hastily inked and colored with marker. I basically just wanted to get these down on paper, rather than stress out over them. I’m not trying to make excuses though–that Skrull’s foot is terribly contorted and way too big. The next installment will be better, promise.