Here’s one for Southern California locals…

Back when I was a kid (we’re talking the eighties here, bear with an old-timer), there used to be a chain of hardware stores called National Lumber. Contrary to their name, I believe they were in fact, not national, but a local phenomenon. They were most recognizable for their two cartoon mascots, Shorty (a man in overalls and a painter’s cap) and Cheap Chicken (obligatory wise-ass animal sidekick). National Lumber’s catalogs and mailers were peppered with comic strips and gags featuring Shorty and Cheap. It wasn’t amazing material, corny with crudely executed art–but it was pretty funny stuff for hardware flyers! And as a kid with a modest allowance, who had to scrape together 75 cents to buy a “real” comic book, those catalogs were a good diversion while I was trying to gradually accumulate three quarters. National Lumber even had a series of commercials, featuring Shorty and Cheap in animation, and their catchy jingle:

It’s the good stuff, at the right price,
Na-tio-nal Lum-ber!

Whenever my parents needed something from the hardware store, I would ask them if they were going to National Lumber. The answer invariably was no, due to their prices and/or geographical distance. Well sadly, National Lumber went out of business, sometime in the mid-to-late eighties. I probably hadn’t thought of Shorty and Cheap Chicken in over a decade, but someone at work brought them up, and we looked up the commercials on YouTube.

After being reminded of these obscure characters, I naturally felt the need to draw my take on them: 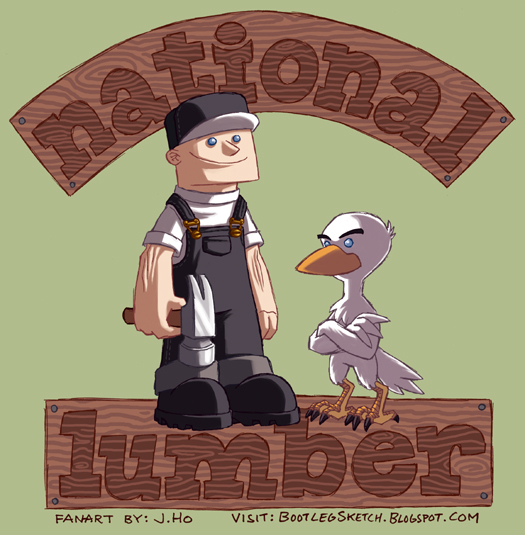 This was a lot of fun, and actually quite a challenge. In situations like this, I typically don’t like to do draw the characters in their native style, because if you want to see that, you can go right to the source. But at the same time, you don’t want them to be unrecognizable. Hopefully this piece walks the line. I’m pretty happy with how the wood grain turned out, but I’m not so sure about the background color.

That jingle is gonna be in my head all day!

For more on National Lumber…

3 thoughts on “Anyone remember these guys?”