Sometimes, like a jerk, I waste hours and hours playing Angry Birds, a game meant to be a casual distraction, which has instead become an obsessive… obsession. Other times (still like a jerk) I post a super-late blog. Here is such a blog post now: 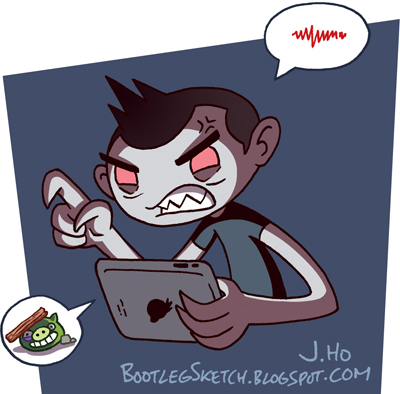 On Friday night I was too tired to draw, so I went to bed with the intention of playing a few levels of Angry Birds and then going to sleep. Fast forward to: me staying up until 9:30am, when I finally went to sleep (cursing at myself all the while). Woke up a few hours later and headed to the Long Beach Comic Expo, where I hung out with Dustin and Peter Nguyen (they are not related!), and drew this. Peter was kind enough to lend me a pen so that I could ink it. I drew another piece too, which I came home and inked, and will be posted this week in a timely manner, unlike today’s sketch.

I’ve been in sort of a rut lately, in addition to being busy with assorted other things. It was very eye opening to me that I was able to go hang with some friends, and even on very little sleep, bust out two drawings very quickly. I guess even weirdo recluses such as myself need to occasionally leave our secret lairs and get a change of scenery.