Skip to content
Resuming my series of Masters of the Universe action figure variants re-purposed into new characters–today, I bring you Dragon Blaster Skeletor, now recreated as simply Dragon Blaster, another member of Skeletor’s Elite. I’ve dubbed his previously unnamed pet dragon Paralyzor, a name which comes from one of the international versions of the figure, known as “Skeletor Paralyzor.” 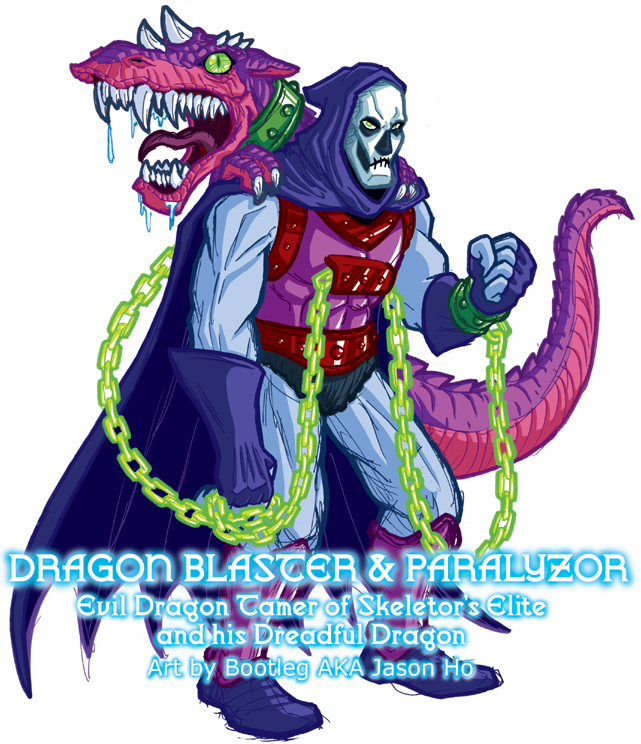 To be perfectly honest, I’m really not crazy about how this one turned out. The drawing feels lethargic to me, and the skull-motif face paint just didn’t turn out the way I envisioned it. On the plus side, although I found it a struggle to get the colors to mesh, I think that part (at the very least) turned out reasonably well. This is one that I’ll need to revisit someday, but for now I’m just going to move forward. Super-nerdy character profile follows–but stay tuned (or skip ahead) for a bonus review!

PROFILE: From a perilous cliffside, about a day’s ride from Snake Mountain, the air is sundered by fearsome draconic cries. The cliffside, riddled with a network of caverns, serves as a roost for Skeletor’s fleet of dragons. The evil warrior DRAGON BLASTER walks silently and authoritatively amongst the trained saurian killers, charged with their care and training. His training techniques are cruel and harsh, revolving around the gradual break down of each dragon’s will, accomplished partially through psychic conditioning. Dragon Blaster is a capable warrior in his own right, but prefers to let his ‘pets’ do the fighting. His favorite is a particularly vicious dragon named PARALYZOR, whom Dragon Blaster can only rein in with the aid of a bewitched collar and psionic chains. Paralyzor is named for his paralysis-inducing venom. In spite of his relatively diminuitive size, he is particularly pugnacious, and has frequently taken down fearsome beasts several times his size.

HISTORY: Dragon Blaster is, in his own twisted way, an idealist. Hailing from a long lineage of Infinitan dragon tamers, Dragon Blaster was raised on tales of Infinitan domination over man and beast alike. To him, the subjugation of dragons (who are perhaps the most powerful of all living things) is the ultimate symbol of Infinitan power. Skeletor, seeking to fortify his aerial cavalry, has taken advantage of Dragon Blaster’s idealism by painting a vision of utter Infinitan supremacy brought about by a fleet of dragons with numbers so great as to blot out the sun itself. Thus, in order to ressurrect his ideal of Infinita, Dragon Blaster has joined the ranks of Skeletor’s Elite. He cares little for the petty power struggles between ARMORAX and TERROR CLAW, nor is he interested in the machinations of Evil-Lyn or any of Skeletor’s other lieutenants–very simply, anyone who stands in the way of the Infinitan cause will suffer his wrath. However, in truth, Skeletor only feigns devotion to Infinitan ideals to secure the power of Dragon Blaster’s reptilian fleet. What will happen when Dragon Blaster discovers Skeletor’s true nature?

It is worth noting, that in his struggles against the forces of good on Eternia, Dragon Blaster’s vile enslavement of dragonkind has earned him the lifelong enmity of Granamyr.

Oh yeah, speaking of dragons, I somehow tricked Jacob and Carrie into going to watch a certain dragon-y movie with me:

Ok first up, I have to say, what’s up with the title? This was originally a Korean movie titled D-War, and according to Wikipedia (questionable, I know) the title in the North American release is D-War: Dragon Wars. Buuut… everything I’ve seen for the movie calls it Dragon Wars with D-War as a subtitle. And regardless of that little confusion, how is it that Dragon Wars (PLURAL) becomes D-War (SINGULAR) when abbreviated? Nonsensical.

Well, the movie makes just about as much sense as that crazy little rant I just had. Peppered with large doses of corny dialogue and bizarre leaps in logic, Dragon War must be seen to be believed. However, on the plus side, unlike the little rant I just had, Dragon Wars is filled with dragons! And wars! And dragon wars! Basically, you have to think of Dragon Wars as a Godzilla movie (which it essentially is).

Verdict: Awesome. There are bad movies (which are just no fun), and there are B-movies (which are both bad AND fun). This here, is a bona fide B-movie. Thankfully, the rest of the audience (all seven of them) found this as openly laughable as I did. It was a good time, I didn’t regret spending the money, and I got to see good special effects in the form of bad-ass dragon-y monsters destroying cities and fighting each other.

For More Giant Monster Goodness With A Mysteriously Plural “Wars” In The Title: You must watch Godzilla: Final Wars. Featuring modern versions of almost all of Toho‘s major monsters, Final Wars is mindless monster mayhem at its best. There’s even a battle between the true Godzilla and his ersatz american counterpart (from the lame Matthew Broderick version). For reals!